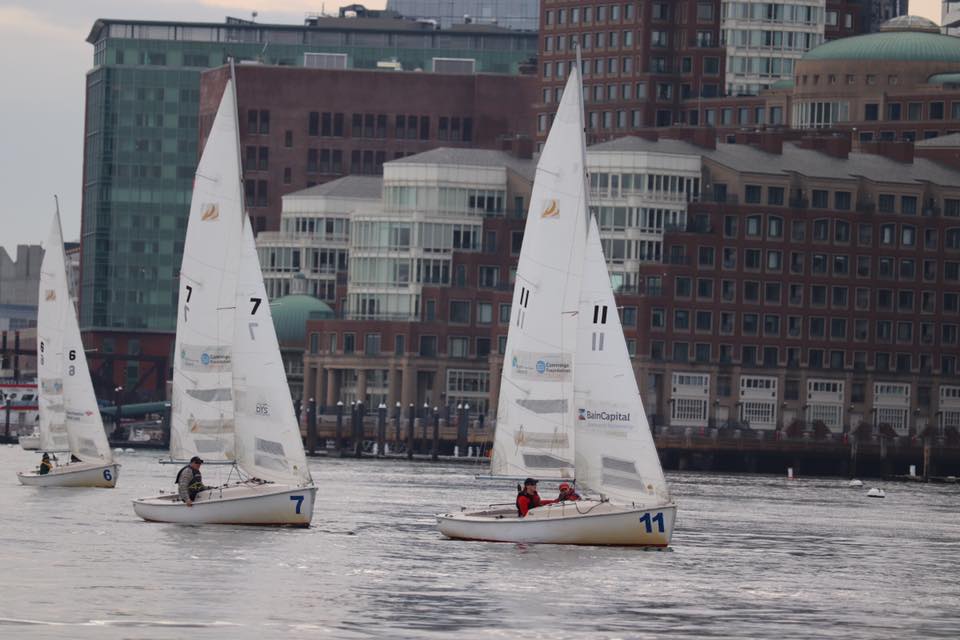 The forecast did not look good for Week 13.  Everything we looked at said we would have less than 5 knots of breeze, and it would be decreasing throughout the day.  The plan was to show up, postpone for a half hour/hour or so, and then send everyone home.  When people arrived to sign in, they didn't even bother going down on the dock and taking the cover off.  Everyone instead was just loitering on the pier, awaiting the surely inevitable cancellation.  We did have one small glimmer of hope, and that was the possibility of a sea breeze developing.  The winds were light enough, and the temperatures warm enough, that we could see a sea breeze.  And sure enough, at about 11:25am, the sea breeze filled in.  The call was made, and we quickly rigged up and headed out.

The wind was coming straight down the harbor from the SE.  Our line was set about even with Pier 1 East Boston, with windward marks a little too far upwind in line with Spectacle Island.  The wind velocity was on the lighter side, but still around 10 kts.  The beginning of the day saw some very heavy current pushing us upwind along the course.  This heavy current caused most of the fleet to be OCS at the start, requiring a general recall and the flying of the I flag.  The pin was definitely favored in this race and there was a large crowd down at that end for the restart and one boat was called OCS and forced to round the pin in order to clear.

The windward leg went fairly quickly, but the downwind leg, against the current was a SLOG.  I admit the course was way too long, but by the time I had realized that, it was too late to move them during this race.  When they finally did reach the leewards it was Manlio Lopez/Cole Constineau first taking the right gate.  Along with them were Venkat Chalasani/Mitch Wiest and Marty Gallagher/Cindy Olsen who both opted to take the left gate.  The next two boats to round the right gate were Jennifer Rousmaniere/Kathryn O'Neill and Martin Frasier/Art Rousmaniere.  The boats that went left ultimately did not find it to work in their favor.  Frasier/Rousmaniere would pull ahead of everyone to come in first, Lopez/Constantineau would come in second, followed by Greg Howard/Dan Elbaum in 3rd.

Between races 1 and 2 we were able to shorten the course and adjust the pin.  It ended up still being a little pin favored, but less so than previously.  There was still a large group at the pin, and one boat was called OCS, but this time the I flag was not up.  The first trip around the course was much quicker than the previous race.  In Race 1 it took almost 20 minutes to round the course once, and in Race 2 it was down to 15 minutes.  Dylan Callah/Jacob Higgins were the first to round with a lead of three boat lengths on Frasier/Rousmaniere who also went right.  Rounding in 5th was Bryan Lee/AnneMarije Veenland-Lee.  They went right and passed a bunch of boats to come in second.  Lopez/Constantineau rounded in 7th and would pass even more boats and come in 1st.  Reade Everett/Amanda Lyall would come in 3rd.

Between races 2 and 3 we were forced to postpone for an incoming tanker.  We picked up all of our marks and headed to the East Boston shore to wait it out.  The timing was fortunate as the tanker arrived as we were finishing the race.  Luckily it wasn't too cold, and the wait wasn't too long.  Once it was past, we quickly reset the course (even shorter this time), and were able to start.  By this point in the day the current had significantly lessened and starts were a little easier to plan for.  Race 3 started cleanly with strong starts by Matt Marston/Josh Pfosi, Everett/Lyall and Callahan/Higgins.  The first trip around this time was down to 12 minutes, which is closer to what we average on these races.  Callahan/Higgins had a sizeable lead at the leewards and headed left.  The next two boats, John Pratt/Bob Coyle and Everett/Lyall decided not to follow them, and went right.  They wouldn't catch them however, and Callahan/Higgins took the bullet, followed by Frasier/Rousmaniere and Pratt/Coyle.

At this point we decided to sail past our usual cutoff time of 3pm.  The SIs tell us that when there is a significant delay, we have the option of sailing until 330.  We started late because of the wind, and we were delayed for the tanker.  It didn't seem fair to get only three races in, and so we continued.  Race 4 was another pin favored start, with a lot of boats vying for the pin, and the boat pretty much left for the taking.  Pratt/Coyle, Marston/Pfosi, Everett/Lyall and Frasier/Rousmaniere were all together and right on the pin.  Callahan/Higgins had the most speed closest to the line.  Most of the fleet stayed left on the first trip up the course.  Boats were able to catch a slight lift on that side.  At the leewards it was Callahan/Higgins followed by Frasier/Rousmaniere and Luke Leafgren/Conant Brewer.  They all went left, stayed left, and crossed in that order at the finish.

We started our last race, Race 5, at 3:07.  With most people favoring the left side of the course, we had another big group at the pin.  We had one boat OCS by quite a bit, but they were able to recover fairly quickly.  Macaulay/Jachney had a very good start this race with lots of speed at the line.  Again, most boats opted to stay left again as the boats that attempted the right side often found little success.  At the leewards Marston/Pfosi were ahead of the pack followed by Frasier/Rousmaniere.  They would finish 1st and 2nd.  Everett/Lyall made a valiant attempt at the right gate, but would come in 4th, with Pratt/Coyle coming in 3rd.

I think it's safe to say that, based on the forecast, not many people thought we would be sailing.  We were fortuitous that the sea breeze arrived, and a good day was had.  Thanks to all who came out, and congrats to our top 5 on the week...