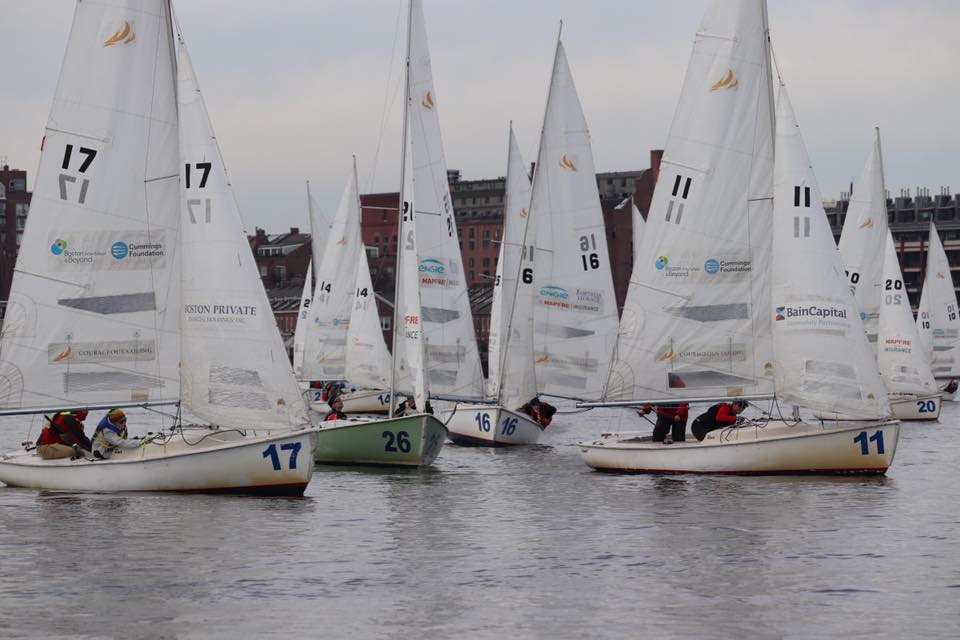 Unfortunately on February 9th, there was a gale warning and 45 knot gusts and we did not go sailing for Week 11.  Some of us chose to go to the boat show instead.  Also, thank you to everyone who stopped by to visit us at the boat show.  It's always nice to catch up with people when we're not outside in 20 degree weather.  But week 12 was not one of those days.  Week 12 was a beautiful day full of sunshine and temperatures in the low 40's.  The RC boat was in its usual position near East Boston.  Winds were varied but generally from the West.  The left edge of the shifts was to Rowes Wharf, and the right edge was all the way to Pier 4 Charlestown.  The windward marks were set in line with the Old North Church.  Velocity was solidly 10 kts, with gusts approaching, but not over 20 kts.  A strong current was running from the top right to the bottom left across the course, especially for the first part of the day.

Race 1 saw good starts by John Pratt/Bob Coyle, Niko Kotsatos/Aeron Hurley,  Angus Macaulay/Kyle Jachney and newcomers Tom and Will Dailey.  By the leewards Michael McAllister/Annya Tischer had developed a pretty solid lead ahead of everyone else.  They took the left gate and Zack and Mike O'Brien took the right, even though it had drifted downwind by about three boat lengths.  It didn't allow them to pass McAllister/Tischer but they also didn't let anyone else pass them either.  Coming in 3rd was Matt Marston/Jocelyn Cook.

During race 1 we learned that a tug and barge would be dropping anchor in the exact spot where our starting line was.  Luckily we were able to finish the race before shifting the course closer to Charlestown.  There was a slight delay and we were able to start again.  In Race 2 it was Daily/Daily and Kotsatos/Hurley at the boat end, and Reynold/Kyle at the pin end all with good starts.  A good chunk of the fleet was late to the start due to the current.  At the leewards Macaulay/Jachney had a 10 boat length lead ahead of the rest of the fleet.  They took the left gate as did Daily/Daily behind them.  McAllister/Tischer rounded in 6th but took the right gate and jumped all the way up to 2nd.  Again finishing in 3rd was Marston/Cook.

By this point in the day it seemed the winning game plan was to generally stay left as it provided a little more current relief.  People seemed to get a better understanding of the current and most of the fleet was up on the line for the start of race 3.  In particular Daily/Daily, McAllister/Tischer and Kotsatos/Hurley seemed to have the best start.  As the boats were reaching the windward marks another tug and barge decided to anchor.  Luckily it didn't affect us, but our friends in the other fleet were forced to abandon and move their course.  Our fleet had a different problem.  While trying to adjust the gate in order to make it more square, the current dragged one of the marks, and what effectively happened was that there were no more than 3 boat lengths between the leeward marks.  Some would say 2 boat lengths.  At any event, it was an intense rounding for sure.  McAllister/Tischer had it easy.  They were the first boat to reach the marks didn't have to contend with the chaos.  The next two boats Manlio Lopez/Robin Weatherill and Kotsatos/Hurley also managed to get through without too much fuss, but it was behind them were it really got messy.  One boat hooked another backstay with their boom and it took some time to seperate.  AnneMarije Veenland-Lee/Amanda Lyall and Jen Bodde/David Palencia decided it was better to hold back and not get involved.  They would finish in first and third respectively with Kotsatos/Hurley coming in 2nd.

Race 4 had most of the fleet OCS at the start and we had a general recall.  With the I flag up there was one boat OCS, and it took them a while to find some clearance to reach the boat end and exonerate themselves, which is why I don't have notes for the start.  But at the leewards it was Macaulay/Jachney and McAllister/Tischer.  They would not be caught and finished 1-2 with JeanFrancois Gillou/Gillmore O'Neill coming in 3rd.

Race 5 saw Pratt/Coyle beating everyone off the line.  Marty Gallagher/Sandy Hayes appeared to be OCS with just a few seconds to go, but they realized and corrected in time.  At the leewards Pratt/Coyle found themselves pretty even with Macaulay/Jachney.  As mentioned previously, it appeared that the winning strategy was to generally stay left.  But this is where the day changed.  With the current lessening some and the breeze consistently inconsistent, the boats that went right seemed to win out every time.  Macaulay/Jachney went right and got a bullet.  Veenland-Lee/Lyall came in 2nd and Gallagher/Hayes finished 3rd.  All three boats took the right gate and went right.

In race 6 it was Daily/Daily, Kotsatos/Hurley and Lopez/Weatherill all on the line with speed.  Veenland-Lee/Lyall waited a few extra seconds for a hole to open up and hit the line with a ton of speed.  They tacked pretty quickly after and headed off to the right side of the course.  They were the first to round the leewards and repeated their strategy of getting right and staying right.  They wouldn't be caught again for the rest of the day.  Zack and Mike O'Brien came in 2nd and Hurley/Kotsatos in 3rd.

The only difference between race 6 and 7 was that there was one extra leg.  With the wind coming from a good direction, we were able to run a course 5 for our last race, which includes an upwind finish.  Veenland-Lee/Lyall again waited for a hole to open at the boat and then tacked immediately and went right.  They would end the race with their 3rd bullet of the day.  This time it was Kotsatos/Hurley in 2nd and McAllister/Tischer in 3rd.

While Veenland-Lee/Lyall were pretty uncatchable the 2nd half of the day, McAllister/Tischer also had a solid outing and won the day by 2 points.  Marston/Cook were the only boat to not have a finish in the double digits, they came in 3rd.  The scores were all very close at the end with only 9 points between 1st and 5th.  Congrats to everyone, especially our top 5 who are...