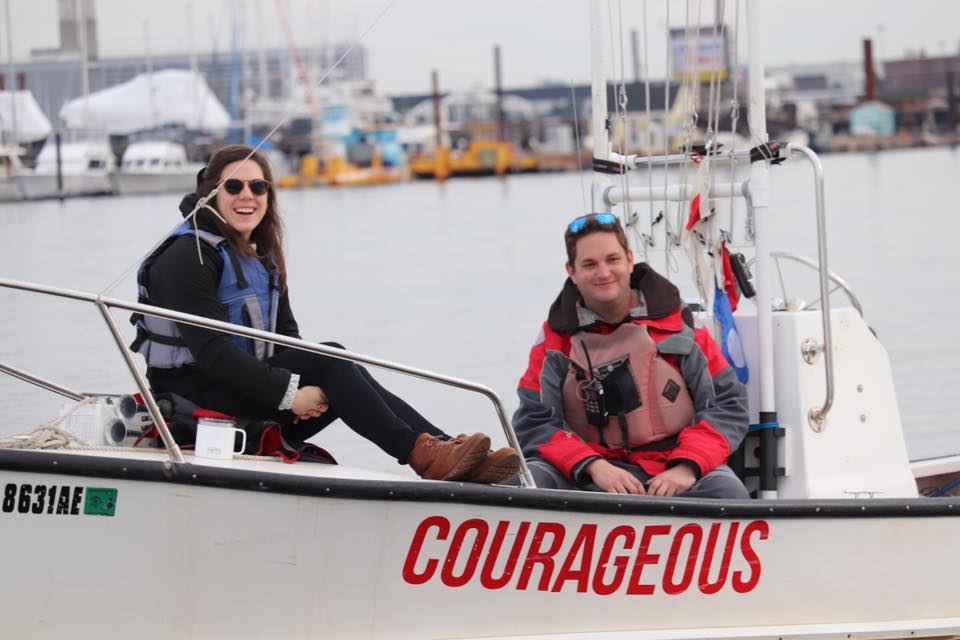 On March 9th we had 15 boats join us for another great week of frostbite racing.  The forecast was not very promising for the day.  The NWS was calling for NW winds at 5 knots, becoming NE at some point, also at 5 knots.  At 11am the breeze was, at best, patchy.  There were pockets of wind scattered about the harbor, but nothing was consistent.  As boats made their way out onto the course, it was mostly the strong outgoing current that propelled the fleet.  Initially we believed that there wouldn't be a significant current, because it was high tide and the height of the tide in the harbor, was above that of the Charles River.  However, because of all the melting going on from the most recent snowstorm, they were using underwater pumps to empty the Charles into the harbor.  As a result, we had a very strong current running from top left to bottom right.

The course was set in an area closer to Pier 4 than we usually occupy.  The starting line was set just off of Pier 1 East Boston, with windward marks in line with Spaulding Rehab in the Navy Yard, putting them in the middle of the shifts.  The righties would go as far right as the Eddy building, with lefties coming in from the Old North Church.  The wind was very light when we started Race 1.  Most boats were not able to get to the line in time for the start, the strong outgoing current making it even more difficult.  But it didn't stop John Pratt/Bob Coyle and Chip Terry/Dave Lucia from having a good start.  They were the closest to the line and got away clear from the rest of the fleet.  Angus Macaulay/Kyle Jachney had the unfortunate distinction of being OCS by only a few inches.  However they pulled off a Herculean effort and would end up coming in 7th on that race, no easy feat!  By the time the top of the fleet reached the leeward marks, the wind was in a big left phase.  Four boats had worked their way ahead of the rest of the fleet, with Terry/Lucia in 1st and Pratt/Coyle in 2nd.  Most of the fleet opted to take the left gate and ride out the lefty.  They would finish in the same order, with Steve Uhl/John Karakashian coming in 3rd.  Note that the top 3 boats in this race would also finish the day in the same order.  After this race we shortened what was previously a very long start line.

In Race 2 the wind again was quiet for the start.  It had picked up towards the end of Race 1 (which took 45+ minutes), but died again.  Most boats were still fairly far from the line at the start.  Jen Bodde/Dylan Callahan were the first boat to cross the line, with Pratt/Coyle right there behind them.  This leg was very very very slow.  No one was actually moving backwards, but it was close.  The light wind and strong current made for a very challenging leg.  But by the time most of the fleet reached the top marks, the wind started to pick up back.  What was initially a very spread out fleet, became much more condensed on the 1st downwind leg.  Michael McAllister/Annya Tischer rounded in 1st, slightly ahead of Pratt/Coyle.  They would take the right gate while Pratt/Coyle went left.  It would work out in Pratt/Coyle's favor as they were able to pass on the upwind leg and came in 1st, McAllister/Tischer in 2nd, and Terry/Lucia in 3rd.

Towards the end of Race 2 a tug and barge decided that it needed to cut through our course.  We were forced to suspend racing while it passed.  Once it had passed we were able to reset the course and resume racing.  However, ANOTHER tug and barge was right behind.  We (again) picked up our marks and headed for safe waters.  This tug seemed to be moving slower than the previous one, but it was still only a few minutes before we were able to resume racing.  Thankfully, there would be no further interruptions on the day.  The start of race 3 was mostly boat favored, but Benjamin Geffken/David Palencia and Jim Kann/Neal Goldman both managed good starts at the pin.  The wind took a hard right as boats were headed downwind.  At the leewards the first boat to round was Uhl/Mount followed by Bryan Lee/AnneMarije Veenland-Lee, and Jared Reineck/Victoria Kyle.  The wind squared itself for the 2nd trip around the course.  Reineck/Kyle would slip past the others and take the bullet.  Uhl/Mount would come in 2nd, with Macaulay/Jachney coming in 3rd.

For race 4 the wind had shifted further right that we'd been seeing.  We hopscotched the windward marks to the right in order to account for this.  A slight increase in wind velocity meant that most of the fleet was on the line for the start.  A few boats jumped out ahead of the fleet including Macaulay/Jachney, Bodde/Callahan, McAllister/Tischer and Lee/Veenland-Lee.  The wind took a hard right shortly after the start and a few boats opted to get far right, but they were quickly disappointed by the big lefty that came in right after.  The first three boats to round the leewards were in order: Terry/Lucia, McAllister/Tischer and Macaulay/Jachney.  They would finish the race in the same order.  After this race we decided to stretch the length of the course.  The increase in wind velocity made for a very short race, and we adjusted accordingly.

The wind continued to pick up even more, and Race 5 had a very competitive start.  Terry/Lucia won the boat end with a solid start.  Also hitting the line with good speed were Macaulay/Jachney and Zack O'Brien/Mike O'Brien.  By the time they reached the leeward marks, the O'Briens had worked out a fairly sizeable lead.  Closest was Terry/Lucia, but they would be unable to catch them.  McAllister/Tischer rounded in 3rd and opted to go left.  But the right side would pay off as Reineck/Kyle would sail past them into 3rd place.

The last race of the day was a course 5, which calls for an upwind finish.  The wind died with about 2 minutes to go in the start sequence, and as a result most boats were not on the line for the start.  Kann/Goldman were the first to tack off and head right, followed by Terry/Lucia.  The RC boat moved and was anchored to the right of the windward for the next two windward rounding.  At the 2nd windward rounding Kann/Goldman were in first.  They would slip to 2nd and Pratt/Coyle jumped into first to take the bullet.  Terry/Lucia would come in 3rd.

At the end of the day it would be hard to catch Terry/Lucia.  In race 3 they came in 6th, which was their worst finish for the day.  They had 9 points on Pratt/Coyle and Uhl/Karakashian who were tied with 25 points.  Congrats to everyone, especially our top 5 finishers...