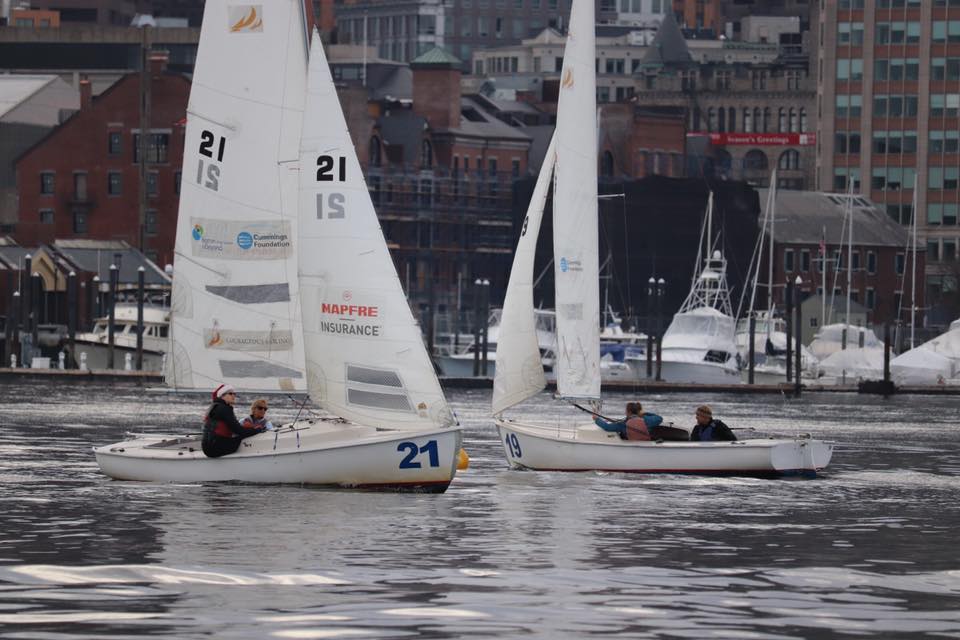 On Saturday our Frostbite fleet was determined to go racing, despite the conditions.  We were patient and flexible and still were only able to get in one race on the day.  Coming into the day, the forecast was calling for 10 kts out of the west, switching to north at some point.  When we left the dock at 11:35 the winds were light but still sailable.  At 11:55 as the last boats were approaching the race course, the wind began to shift.  There wasn’t really anything above 10 kts, but with 5-7 kts we were able to make the boats move.  Initially we had windward marks near BSC and Lewis Wharf, but once the northerly came in, the windward marks were moved in line with Pier 4 Charlestown.  After the short delay we were able to start our first race by 12:10.

A strong current coming down the course was the most challenging factor facing the fleet.  With lots of rain expected on Sunday, they were emptying the Charles River with the force of a small biblical flood.  This made it very hard for boats to be up on the line at the start.  The boat closest to the line by far was Jen Bodde / Dylan Callahan.  They opted to dip-start instead, ducking just below the line with about 10 seconds to go.  Most boats were still 1-2 boat lengths away at the gun.  After the start, most of the fleet opted to head to the right side of the course.  Usually along the East Boston shore you can find some current relief in the more shallow water.  Boats on the left side (in the middle of the channel) were unable to get any speed initially.

It took about 15-20 mins for the fleet to make their first trip around the course.  At the leeward rounding it was Matt Marston / Cheney Brand with about 30 seconds on the 2nd place boat.  They took the right gate and headed for current relief.  The next three boats all rounded together with Steve Uhl / Rebecca Mount getting inside of Bodde / Callahan and Sandy Hayes / Cindy Olsen.  Opting instead to go left, Hayes / Olsen took the left gate while Manlio Lopez / Kris Kretsch rounded in 5th and went right.

While the right side definitely appeared to be favored, the longer you stayed right, the more dangerous it became.  Often times the current can get very swirly once you get past Pier 1 in East Boston.  Instead during the 2nd time around the course, it seemed the boats who favored the middle, or the left (where there was more pressure despite a potential wind shadow) were better off.

At the end, no one would be able to catch Marston / Brand.  They finished at least 60 seconds ahead of the rest of the fleet.  Uhl / Mount were able to keep their 2nd place position, and Lopez / Kretsch managed to sneak past two boats into 3rd place.

As the last boat was finishing and we were preparing to start the next race, we lost the wind.  It very suddenly went from seven(ish) knots to zero knots.  Because the conditions were clearly not sailable, we decided to postpone.  Luckily it was an absolutely beautiful day on the harbor.  Temperatures were in the low 50’s and people appeared not to mind floating around on an unseasonably warm day.  The forecast was not promising and there was very little hope of the wind picking up.  After waiting for half an hour, it was obvious that our day was over, and the decision was made to head in.  Our neighbors at BSC stuck it out for another 20 mins after us, but they eventually called it as well.

After an extremely well-executed tow back to the dock, we gathered at Pier 6 for Series 1 awards.  First place went to Reade Everett, Dana Robinson and Michael McAllister.  In their four weeks of racing they finished each week in 1st, 3rd, 2nd and 6th.  Well done!  They finished slightly ahead of Niko Kotsatos who had very strong days weeks 2-4.  In third place it was Sandy Hayes, Cindy Olsen and Marty Gallagher who also got hardware.  Congrats to all of our prize winners and a big thank you to everyone in the fleet for coming out for Series 1.  I’m sure that Series 2 will be colder, but will hopefully have more of the great racing that we’ve seen already.

We managed to get a bunch of great photos before the wind turned off, if you missed it before to check out our facebook album.

Don’t forget to check out the scores over the break.  We are off for the next two weeks, and will resume racing on Saturday, January 5th.  I will be gone the following week on January 12th, but will be back for Week 8 on January 19th.  In the meantime, from everyone at Courageous Sailing we wish you a very happy and healthy holiday season.  Thank you all for your involvement with Courageous and all that you do to support our mission.  I look forward to seeing you all after the break!