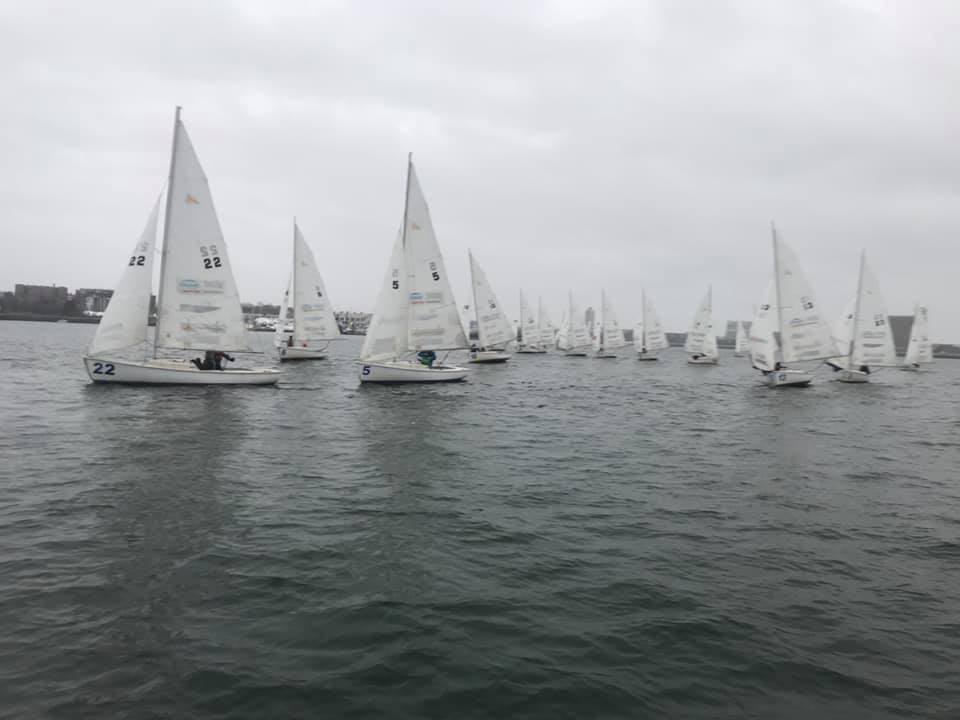 On January 5, our Frostbiting Fleet returned from our winter hiatus ready to kickoff Series 2.  Traditionally some of the worst Frostbiting days are not the days when temperatures drop below zero.  But it's the days where they hover around 32/33 degrees with rain, lots of rain. Those are the worst.  Luckily for us, the forecast was calling for temperatures about 10 degrees warmer than that, temperatures in the low 40's with light showers in the afternoon, increasing in frequency and intensity as the day would progress.

Winds for the day were out of the north, moving to NNE and NE throughout the day.  There were a few puffs here and there, but for the most part wind seemed to be holding between 4 and 9 knots.  Our start line was located near the middle of the channel, closer to the downtown Boston side, with our pin close to the entrance to Long Wharf, leaving enough room to allow (most of) the commercial traffic to pass.  Windward marks were towards north side of Pier 1 East Boston. Since there was no skippers meeting, a few boats decided to leave the dock early to do some practicing before racing began.

Race 1 started right at 12noon.  A big left shift right at the start made for a definite pin favored start.  Jen Bodde / Leo Gaskell, Cindy Olsen / Steve Braverman, and Clark Uhl / Rebecca Mount all had solid starts at the pin, and all three quickly tacked together and went off to the right side.  Rounding the leewards Peter Denham / Conant Brewer were first by more than 5 boat lengths. They took the left gate but Bodde / Gaskell rounded behind them in hot pursuit also up the left. Coming in next were Uhl / Mount and Chip and Juni Terry who both opted for the right gate.  Behind them it was Niko Kotsatos / Matt Hebert who followed the leaders and went left. At the finish it was Kotsatos / Hebert in first, Bodde / Gaskell who retained their 2nd place, and the Terrys in 3rd.

For race 2 the pin was dropped back to make for a move even starting line.  However due to some fairly funky wind swirls, both ends of the line appeared to be lifted on their respective ends.  From the RC boat the shifts were always trending right, but looking at the pin end there were plenty of lifts to be had as well.  At the start there were 4 boats in particular that had great starts, all hitting the line with speed and a protected lane: Matt Marston / Cheney Brand, Denham / Brewer, Michael McAllister / Annya Tischer and Manlio Lopez / Jacob Vick.  There were a few boats that found themselves in trouble after this start. Over on the left side of the course a harbor ferry, the Frederick Nolan, was waiting for dock space to open. Usually these boats are in and out pretty quickly, but on this occasion she was just sitting there, wasting team.  The boats that committed to the left side now found themselves with a massive obstruction right in front of them. Unfortunately this happens on Boston Harbor from time to time, and we need to give them room to maneuver. Luckily there was never any danger of collision, it was just very bad luck for those that had to avoid it.  At the leewards McAllister / Tischer had turned their good start into a solid lead of 3 boat lengths. Team Terry was behind them, but they opted for the left gate, as did Bodde / Gaskell in 3rd. The top three could not be caught on the second leg, and they finished in the same order, with McAllister / Tischer getting their first bullet on the day.

For the first few races it seemed as if the rain would hold off.  There was an occasional sprinkle here for there, but for the most part people were staying fairly dry.  The temperatures were still holding in the lower 40's. Race 3 would be the most challenging start on the day.  Right at 1pm as the race was beginning, they began to empty the Charles river. A very strong current started to push boats away from the line.  With about 30 seconds to go, the wind shut off. Those boats that were struggling to hold their lanes at the line began dropping further and further back.  The first row started to drift into the second row, and the second row into the third. Whether through divine providence, or I don't know what, McAllister / Tischer were the only boat to be moving forward.  They had the right side of the course all to themselves they absolutely rocketed off ahead of everyone else. At the leeward rounding two boats had significantly separated themselves from the rest of the flee,  McAllister / Tischer and Marty Gallagher / Sandy Hayes. Gallagher / Hayes were only about 10 seconds behind, but the rest of the fleet was at least 60 seconds behind them. They would not be caught, picking up bullet number two on the day

For race 4 people seemed to play the current a little better, and there were more boats on the line with Amanda and Brett Lyall the closest to, and fastest at the line.  Boats seemed to be split most of the way up the course, with a few more opting to stay left and try and grab the shifts that were coming off the developments in East Boston.  Kotsatos / Hebert round well ahead of the rest of the fleet at the leewards. The wind was getting lighter, helping to push Kotsatos / Hebert further ahead. The Goethart family would be the closest to them, and end up finishing in 2nd, and Denham / Brewer managed to pass a few boats the second time around to finish 3rd.  With a minutes to go before the start of race 5, a very big righty came in, creating a huge pile up at the boat. No one was OCS, but many boats had the door shut in their face. Marston / Brand appeared to have the most speed at the boat and still avoid the mess. Somewhere between 5 and 10 rows back were McAllister / Tischer.  Yet again, somehow they managed to steer themselves clear of all the mess and into another solid lead at the leewards. Gallagher / Hayes had a very nice leeward rounding and managed to get inside of a large group. Same for Team Goethart who had a good rounding on the left side. They would finish 2nd and 3rd respectively with bullet number 3 to McAllister / Tischer.

At the end of race 5, the weather began to worsen.  Increasing rain and decreasing temperatures were beginning to dampen our spirits.  But it didn't stop Team Goethart from having a great start at race 6. Maybe it was the candy they were handing out all day, but good fortune was on their side as they managed to clear themselves with 5 seconds left for a great start right on the line ahead of everyone.  At they leewards they were neck and neck with McAllister / Tischer, with the former going left and the latter going right. McAllister / Tischer would again finish on top, their 4th on the day. The Goetharts would come in 2nd, with Kotsatos / Hebert in 3rd.

Overall, and despite the weather at the end, it was still a great day full of exciting races.  Congrats to everyone who came out and to our top 5 finishers..

Now that I've re-acclimated to our climate, I can't wait to get back on the water with you next week.  I'll be back with Carl's notes and my week 8 preview on Friday. Have a great week everybody!

Due to higher gusts, green flags only
Its the final hours of our Spring into Saling event, buy your lessons and memberships today! Spring Sale