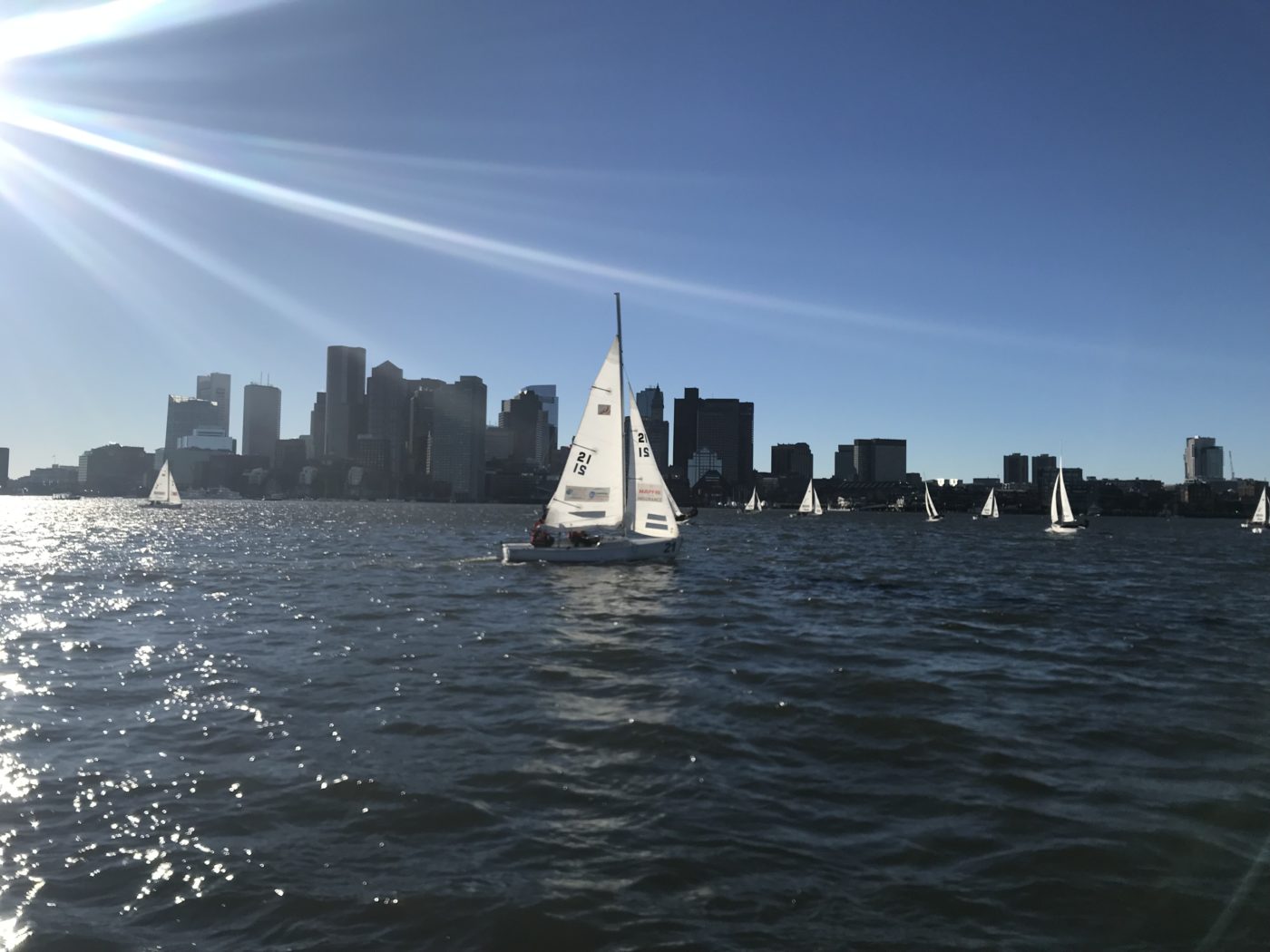 After having to cancel Week 6 due to absolutely frigid temperatures, it looked like Week 7 would be a wash as well. But with some patience, a little good fortune, and a TON of wind, we were able to get in 4 races and kickoff Series 2 with a great day on the water. By 11:30am the rain had stopped, and the temperatures were very quickly dropping. The wind was more than what was forecast, as we were seeing gusts upwards of 35 knots. It was clear that there was no way we could sail in those conditions. Usually once the wind is over 30 knots, things on the boat start to break, and it's less about racing and more about surviving. So the decision was made to postpone for the time being. At 12:30, we had a competitors meeting to determine our plan. The wind was still over 30 knots, and our friends in the other frostbiting fleet had returned to the dock having left the dock earlier and were overwhelmed by the heavy breeze. We decided that if the wind did not decrease by 1pm, we would cancel the day and do some barstool sailing instead.

At approximately 1253pm the wind finally dropped, and we saw gusts of 25 instead of 35. We decided that we would give it a shot, with the understanding that the wind could come back up, and we would possibly have to cancel. With reefed mains, our 17 remaining boats left the dock and headed out on the race course. The course was set in the usual spot, with the starting line near Piers Park and the windward marks off of Lewis Wharf and BSC.

The wind was very shifty this day. It took a few extra minutes to get the course set due to almost 90-degree wind shifts. We would have moments of a SW breeze (which was the direction earlier in the day), and long phases of a NW wind. But as the wind settled in, the righties became more of the norm, and the course was again shifted right. And while wind velocity did indeed pick back up, it never got above 30. However, we did see 29 and 30 knots multiple times during racing, making this our windiest day of the season. So far.

For most of the day a strong current was running across the course from top right to bottom left. This was extremely evident at the windward mark. On numerous occasions boats continued to sail well past the starboard layline, only to find they would miss the mark and have to crash tack twice. There were definitely more than a few boats that ran into a windward mark or two. Some boats found success by approaching the mark on port instead and capitalizing when the starboard tackers realized they were not going to make it. With strong current and big righties, the right side was popular all day long. Boats were rewarded by staying along the East Boston shore as long as they could before tacking out. At some point the locks to the Charles River were opened, and we were hit with some fairly sizeable pieces of ice. Most were just below the surface and almost impossible to see. Luckily no damage occurred, but the loud thud made when sailing into one was definitely cause for heart palpitations of surprised skippers and crews. There was however some damage due to a collision that took place after the last race had finished. Just use this as a reminder to always keep a sharp lookout at all times, even when not racing.

Race 1 was almost a microcosm of the entire day. The top 4 finishers for the day finished the first race in places 1-4. Matt Marston and Cheney Brand got the bullet, but very close behind was Mark Lindsay and Jim Watson, followed by Cole Constantineau / Manlio Lopez and Angus Macaulay / Kyle Jachney. Race 2 was almost a repeat finish with Marston/Brand in first, but the same teams coming in 2-4, albeit in slightly different order. Macaulay/Jachney were edged out of 2nd place by Constantineau/Lopez in one of the closest finishes we have ever seen by what seemed to be less than 1 inch.

As we were about halfway through race 3, a large composite tug/barge appeared heading outbound, and looking to sail through the middle of the course. Instead of possibly having to cancel the entire race, the call was made to shorten the course. When a race is shortened we will sound the horn signal and fly code flag "S", which is a white field with a blue square in the middle. If the course is shortened, you only need to sail between the leeward gate to finish.  Boats that didn't sail through the gate were marked as DNF as they did not properly finish the course.

Despite the shortened race, Lindsay/Watson were able to escape with the top finish. Marston/Brand used a pile up at the windward mark to jump up from 10th to 6th, a jump that played a pivotal part in the final standings. The last race again went to Marston/Brand with Lindsay/Watson right behind them again. That gave them both a total of 9 points on the day. But with three bullets, Marston/Brand owned the tiebreaker, and thus, the day.

Congrats to everyone who stayed and survived one of the more wild days we've had. And a special congrats to our top 5 finishers:

It's still early but the weather for next Saturday is looking promising, with more reasonable winds and temperatures. Of course it could be 10' of snow for all we know, so stay tuned for our Week 8 preview on Friday.