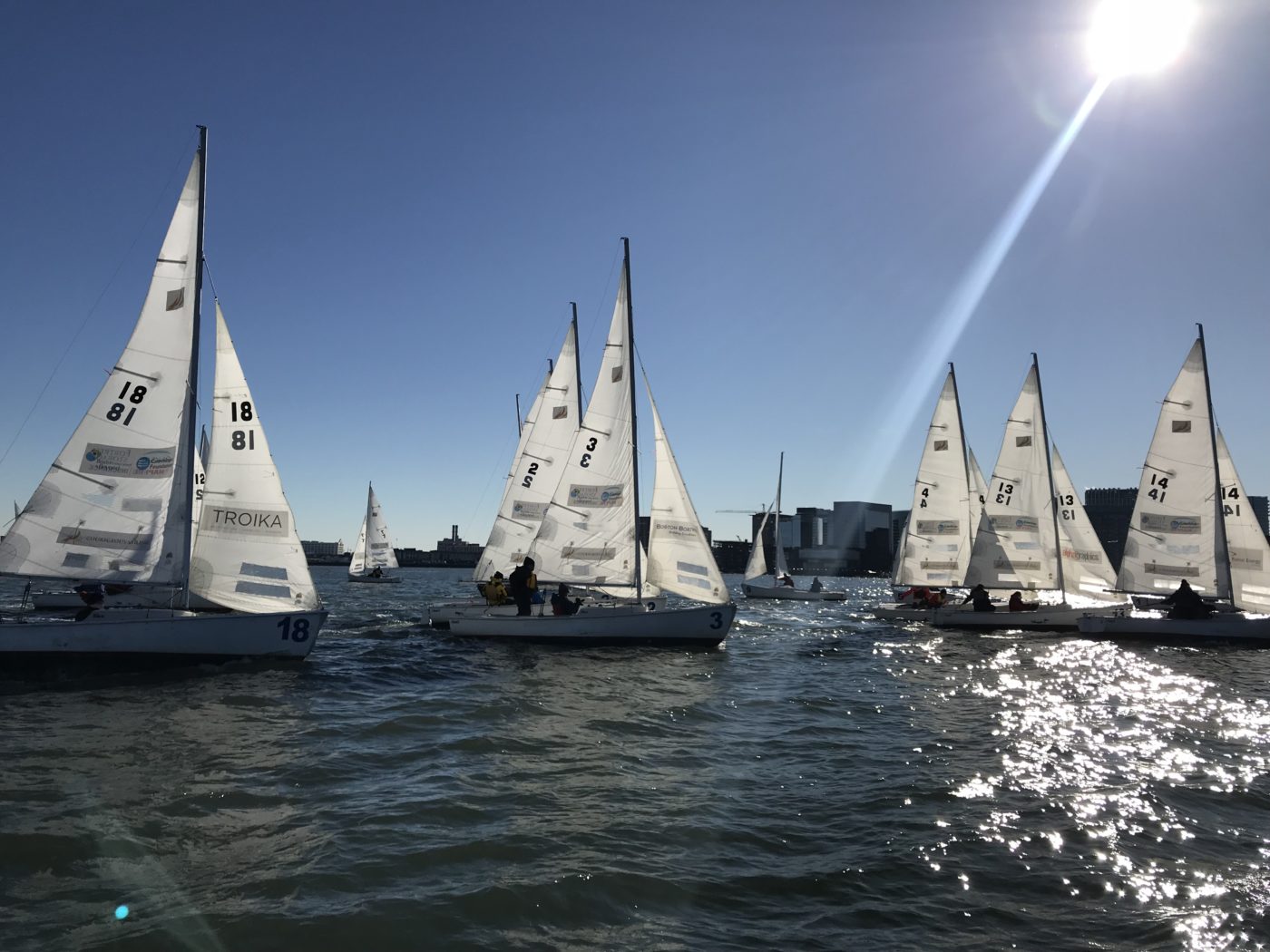 Thanks to everyone who came out and made our first day of frostbiting a big success. Despite slightly colder than usual temperatures for this time of year, the conditions allowed for some great racing. Temperatures were in the low 30’s with minor cloud cover. When the sun was out, it definitely helped to warm up those icy fingers and toes that maybe haven’t adjusted yet to the conditions this season. Wind was out of the Northwest at 10-15 kts, with lulls dipping to 5 kts and the gusts approaching 20kts.

The course was set with a starting line near the Nantucket light ship, along the east Boston shoreline. The windward marks were about 100 yards upwind, next to Pier 1 East Boston. High tide was at 11am which meant that the current was pushing boats over the line most of the day. The first race of the frostbiting season started with a general recall, and the implementation of the 1-minute rule. Remember, when the 1-minute rule is in effect, and if you are OCS with less than 60 seconds to go, you need to round an end of the starting line before you are clear. Simply ducking the line is not enough.

The breeze was shifty enough to keep everyone on their toes. Early on, those who went right were rewarded with steady breeze and some fortuitous lifts. Going left was risky and could get you stuck in a wind shadow. It seemed the winning move for the day was to avoid the pile-up on the boat end of the line, hang back for a second and then hit the line  between the pile-up and the RC with good speed. If you tacked and headed right, you were all set with clean air and a nice lift when you were back on starboard. On the second downwind leg, when sailing to the finish, the boats that sailed directly towards the pin were able to pick up a few places, leading to some very tight finishes.

The sixth and last race of the day was a course 5, with an upwind finish. During this race, an incident between two boats led to our first protest hearing of the season. In the hearing, the following facts were found...

-During the race, while approaching the finish, Boat A was on port tack, attempting to squeeze in ahead of boat B, a starboard boat, and the pin end of the line.
-Boat A was unable to keep clear and contact was made with boat B as they were both crossing the line.
-Boat A then did three penalty turns and refinished the race.

It was determined that boat B, despite being the stand on vessel, had ample time and opportunity to avoid contact. Instead, there was no attempt to avoid until after the boats had already hit. Boat A was scored as they refinished and boat B was disqualified for violating rule 14.

A very big thank you to our protest committee. And to everyone who helped make Day 1 a success and congratulations to our top five finishers!

Matt Hebert and Reade Everett- 18 points
Matt Marston and Anne Marije Veenland- 23 points
Ken Deyett and Luiza Smith- 25 points
Jen Bodde and Leo Gaskell- 28 points
Zack O’Brien and Ben Zorfus- 38 points
Before we move on to Day 2 we need to find some fleet captains. If you have a nomination for the position(s), please email frontdesk@courageoussailing.org by end of the day on Thursday.

If you have any questions don’t hesitate to reach out to us. In the meantime, look for or Day 2 preview, which will be sent out on Friday.

Thanks, and see you next week!
Connection