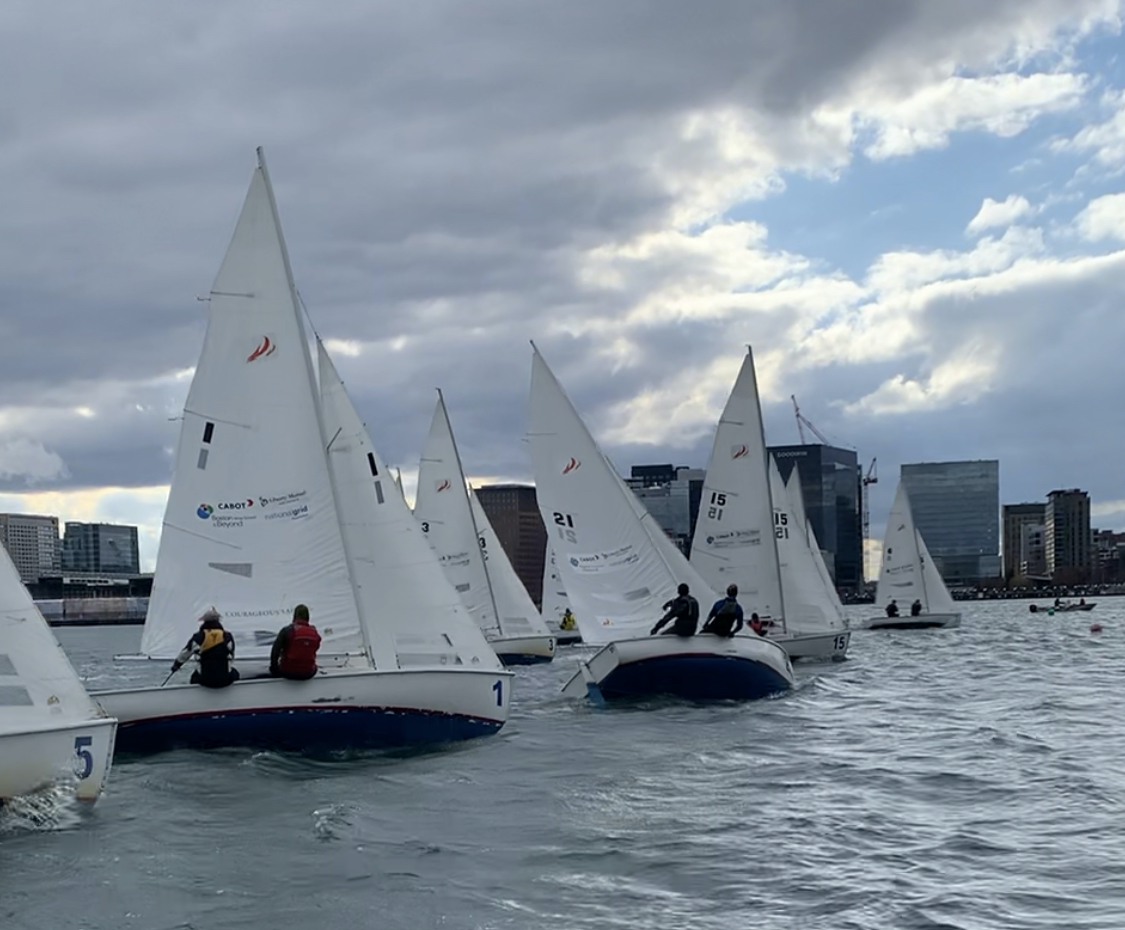 Welcome to our first recap of the season.  Each Tuesday I'll be sending a recap of the previous week's events, as well as some insight into what was and wasn't working for people out on the course.  We will also use this space to have some of our fleet members share their thoughts on the day, and give us all an opportunity to learn a little more about each other.  So for now, let's get going!

To start, we could not have asked for a better kickoff to our 2020-21 Courageous Sailing Frostbite Season.   Steady winds, ripping current and a wide-open harbor made for some fantastic racing on Saturday.   As people arrived on the pier, it was wonderful to see so many new faces along with those returning faces we know so well.  This year we are attempting contact-free check in, which seemed to run smoothly on it's first attempt.  With no skipper's meetings this year, the fleet was quick to get out on the water and test the conditions.

As previously mentioned, conditions were darn near perfect.  Winds were out of the WNW with an average of 12 knots.  The direction was fairly steady with only minor oscillations throughout the day.  The gusts were topping out at about 20, with the biggest gust being 23 kts right as we were starting the first race.  High temperature for the day was 49F and while the sun seemed to want to make a bigger appearance, it was mostly hidden behind clouds for the majority of the day.  The course was set directly in the middle of the channel between East Boston shipyard and Rowe's Wharf.  The windward marks were in front of the North End, somewhere between Lewis Wharf and the Old North Church.  The starting line was long, but not too long, with a slight pin favor at times, especially as the day went on.

A strong current running from the top to the bottom of the course was a dominating factor all day long.  Boats were forced to the edges of the course to seek current relief and upwind legs seemed to last much longer, while downwind legs zipped by.  At the start of Race 1 the breeze was up and most teams were a boat length or two away from the line, probably due to the current and it also probably being the first race in a long time for a lot of people.  The closest to the line was Cole Constantineau/Manlio Lopez down at the pin end about a boat length ahead of everyone else.  But James Pinder/Ian Taylor were not too far behind and got a great start right in the middle of the line and sailed out to an early lead.  As the fleet split pretty evenly to the right and left in order to find some current relief, Pinder and Taylor extended their lead even further so that at the leeward marks they were 12-15 boat lengths ahead of second place.  They would not be caught in this race and eventually came in first place by about the same margain.  I believe this is their first time racing at Courageous, and to get a bullet in the first race is no easy task.  Well done!

Taken at the start of Race 1 - you can see the green starting mark directly in front of the safety boat.

The start of Race 2 had much less line sag and more of the fleet up on the line.  Jim Petitpas/Jeanne Petitpas were closest at the pin end with Niko Kotsatos/Carolyn Marsh in the middle, and Matt Marston/Cheney Brand at the boat end.  The breeze was a bit lighter this race, and current relief quickly became important with most of the boat end starters tacking early and getting out to the right along the East Boston Shore.  Kotsatos/Marsh would lead right from the start and not look back.  At the leeward marks they had a slight lead over Reade Everett/Dana Robinson and Marston/Brand and they would all finish the race in the same order. 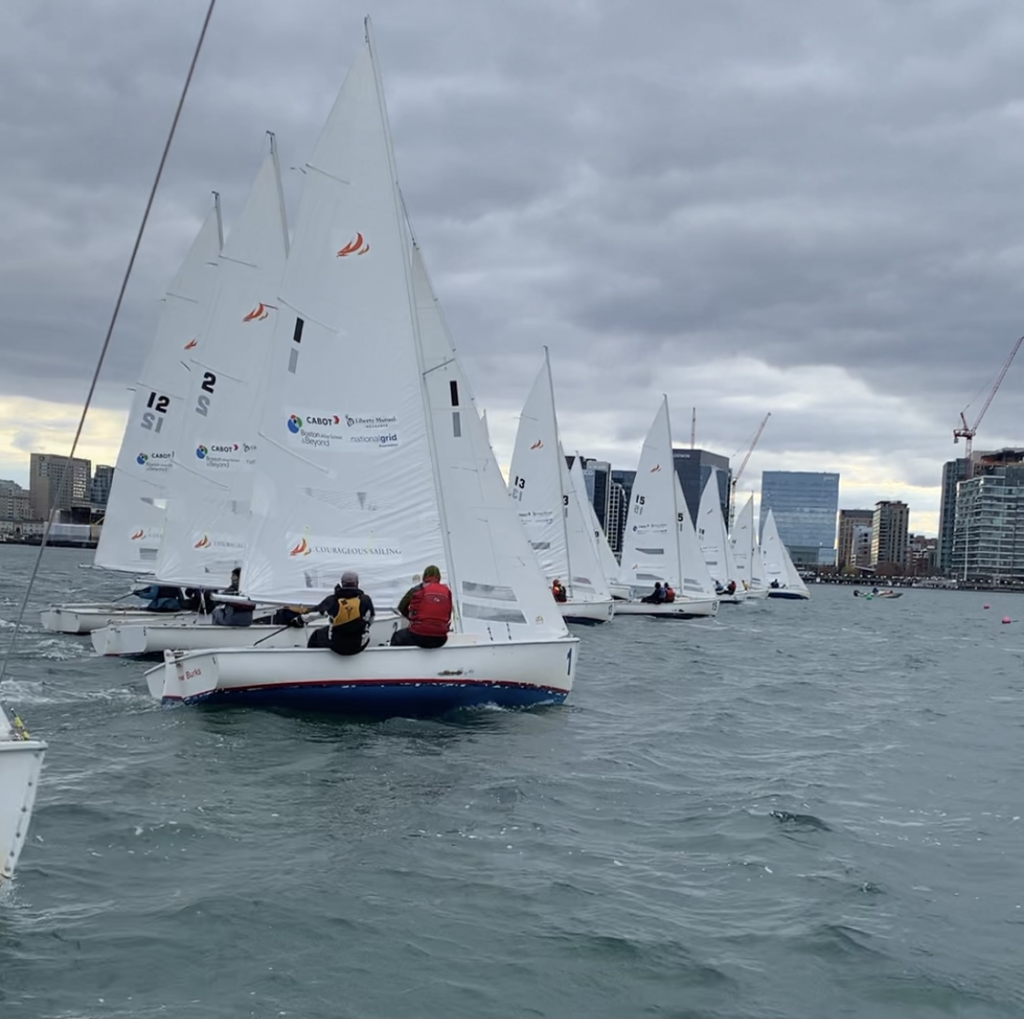 At the start of Race 3 you can see Jim/Jeanne Petitpas (#3)  closest at the pin end.  Kotsatos/Marsh (#15) and Marston/Brand (#1) were again right on the line with lots of speed and clear air.  Kotsatos/Marsh repeated their previous success and took another bullet in Race 3 while Marston/Brand and Everett/Robinson flip-flopped and finished in second and third respectively. 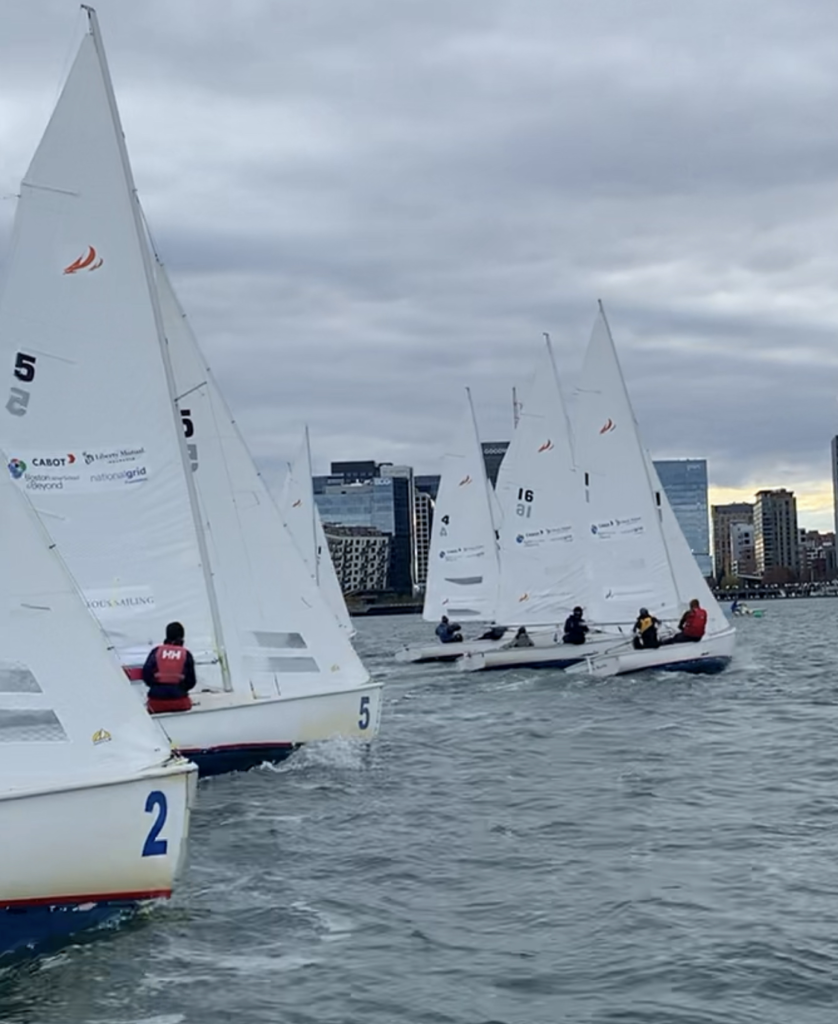 Marston/Brand had an absolutely beautiful start in Race 4.  You can also see Mary Hennessee/Stuart Starkweather right along with them in the middle.  Kotsatos/Marsh were in the second row at the start, and quickly tacked out to the right to get some clear air.  It definitely worked eventually for them because they finished with their third bullet in a row with Pinder/Taylor in second and Marston/Brand in third.

Race 5 had a slight pin favor at the start with most of the fleet starting on the left end of the line.  That left the boat end wide open for Chip Terry/Dave Lucia who zoomed out to a lead.  They increased their lead as they rounded the leewards with Kotsatos/Marsh and Marston/Brand about ten boat lengths behind them.  Rounding in fourth place was Everett/Robinson and they opted to take the left gate, while the three boats ahead of them went right.  They managed to pass all three boats the next time around and finished with the bullet.

Race 6 was our final race of the day and featured a Course 5 (upwind finish).  Another pin favored start saw more boats on that side and Ken Legler/Emmet held their ground and won that end.  Because it was a Course 5, I was able to observe the windward mark roundings for the first time that day.  It was immediately apparent the havoc that the current was causing.  But I did notice that people seemed to be doing their circles, which is always a good thing.

Kotsatos/Marsh finished with their fourth bullet on the day, securing their space at the top of the day's standings.  Great job both of you!  Niko was kind enough to share some of his thoughts on the day and I wanted to share them with you here...

Thank you Niko for your kind words and for a little insight into the day.

Congrats to our top 5 finishers on the day...

I also want to take this time to thank all of you, our frostbiters, for supporting Courageous Sailing.  By joining us for the season you're not just taking part in some of the best racing anywhere on Boston Harbor, you are also helping us to fulfil our mission to transform lives through sailing programs that inspire learning, personal growth and leadership.  Still not sure what Courageous Sailing does or why it's important?  Check this out.

Personally, Courageous has held a special place in my heart for a long time.  I actually learned to sail on these Rhodes 19s here from my grandfather, who was a member in the early 90's.  I almost forgot about Courageous until  2004 when I was in college and painting houses for the summer.  I was terrible at it.  I was always covered with paint and I also fell off a pretty substantial number of ladders during my short tenure.  I knew it was time for a change.  My friend Mike Hodess suggested I come work with him at Courageous for the summer.  I wasn't really sure what it entailed, but as long as I wasn't falling off roofs, I was game.

Immediately it became so much more than a summer job teaching kids to sail.  It became a place where I felt like I belonged.  While I felt comfortable, I also felt challenged to try new things, and to push myself.  I was drawn to the relationships I developed with my other instructors, and also my students.  It made me want to come back year after year after year.  I loved working in the Youth Program so much that I even agreed to work Frostbiting that winter so that I could come back the following year.

I have been involved with Courageous Sailing for almost every season since that first one in 2004.  I have gone on to work other jobs in other places since then, but have always stayed close to my sailing home and heart.  I've worn many hats here at Courageous over the years: YP instructor, racing coach, cruising instructor, grill master, seagull wrangler and Frostbite PRO.  I've worked in the youth program, the adult program, maintenance and development too.  It's been amazing over the years to see how far Courageous has come.

But I have to say the greatest benefit to having been here for so many years is that I have seen firsthand the long-term impact that Courageous Sailing has.  It's been a joy and a privilege to see the kind of adults that these kids have grown into.  Year after year I have seen students become instructors, instructors become leaders, and leaders inspire a whole new generation of students in the future.  I have watched so many young lives change immensely simply because they were given access to a world on the water that they might have never found otherwise.

That concludes our recap for the week.  If you have any questions during the week, please don't hesitate to reach out.  I will be back on Friday with our Week 2 Preview.

Have a great week!
Nate and the Courageous Frostbite Team