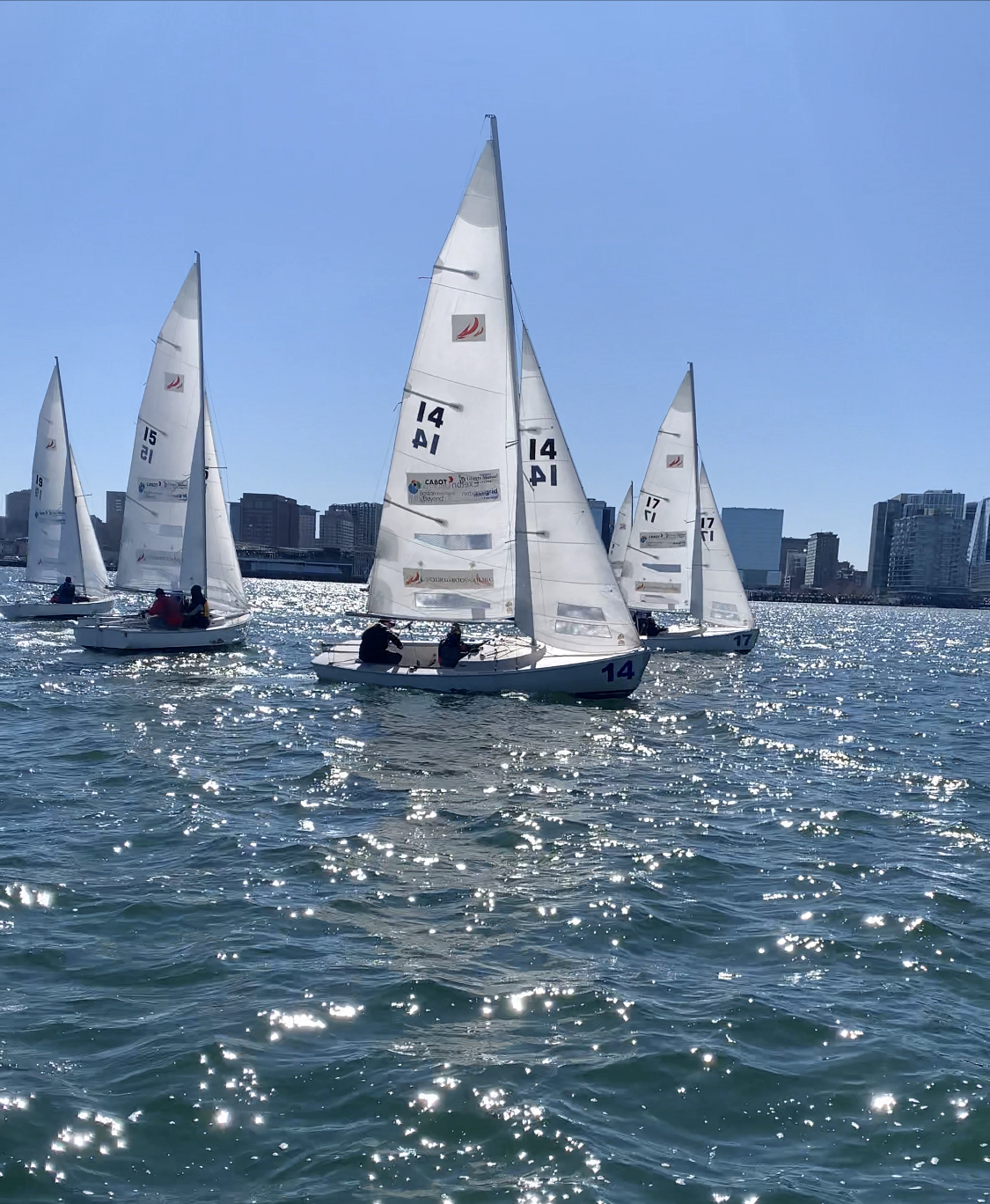 The conditions this past weekend could not have been more different than the previous weeks, and that is a very good thing.  It was a day made for frostbiting, with totally clear skies, a complete lack of other traffic, and winds that kept everyone guessing and on their toes.  After racing I heard someone sum up their efforts on the day by calling it "educated guessing", and I could see why.  Because the shifts were a bit all over the place, it made each race markedly different from the previous.

As the fleet left the dock, we had what appeared to be a Westerly breeze.  As mentioned before the sun was out, and not a could could be found anywhere.  Temperatures were still chilly though, topping out at about 32 degrees that day.  Our course was set in the usual spot, close to the fuel dock in East Boston, with windward marks in line with Rowes Wharf.  However, about 3 minutes after we set the course, the wind went hard right, almost from the NW.  As we adjusted the course to the right, with windward marks in line with BSC, our starting area got pretty close to the fuel dock, potentially creating some interesting situations.  Luckily it did not create too many problems that I could tell, but in the future we'll try to make sure there's enough space.

Starts were very close and competitive this week.  We had an incoming tide during the day that usually would've been pushing boats over early, but a slight outgoing freshwater current made things about even.  After our slight adjustment to the right, we were able to set a nice long course.  We had lots of breeze early in the day, and the long course also helped to even out some of the crazy shifts that were happening all day.

The start of Race 1 had the wind in a right phase, with the wind coming from the USCG base.  We also had an increase in velocity with about a minute to go.  We had 3 boats OCS with about 10 seconds to go, but they realized this and ducked hard to clear themselves at the start.

Start of Race 1, you can see #19 heading upwind while the 3 boats to leeward attempt to clear themselves in time. At the leeward roundings, most of the fleet opted for the right gate, even though it looked like the left gate was favored initially.  Some boats were able to find some success the first time around by sticking to the right and catching a lift as it curled around Pier 1 East Boston.  Terry/Lucia rounded in first ahead of Marston/Brand and Veenland-Lee/Lyall.  Not much would change for the final standings, except Pinder/Taylor were able to pick up a spot after rounding in 4th, and finished in 3rd. 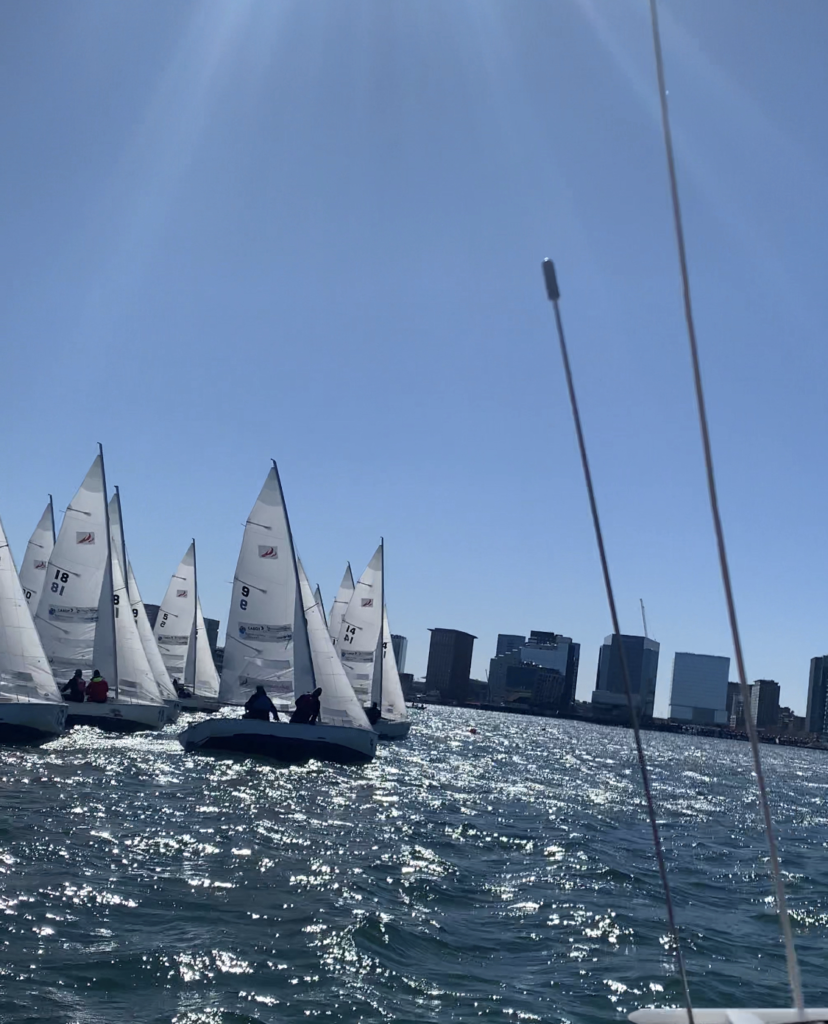 For the start of Race 2, the wind was in a left phase and seemed to be coming from near Rowes Wharf.  This pushed everyone away from the line with a few seconds to go, and we had a clean start.  You can see boats #14 (Marston/Brand) and #9 (Pratt/Coyle) right up on the line at the start.  We were able to adjust the pin and the gate while boats were sailing upwind to make the course a little more square to the wind, although we were really just trying to find an average, and stay somewhere in the middle of it.  As they approached the leewards the order was Pratt/Coyle, Robinson/Hebert and Terry/Lucia.  They would almost finish in that order, but again Pinder/Taylor were able to climb a few spots and finish in 3rd again, with Terry/Lucia in 4th.

The breeze picked up again for the start of Race 3, and about a 1/3 of the fleet was stuck with no place to go and we had our first general recall of the day.  The "I" flag was raised and we attempted to restart.  This time the wind came way down and went further left than we had seen it all day.  This was the beginning of a trend we started to notice as the day went on.  As a result, most of the fleet was away from the line at the start. Taken shortly after the start of Race 3, you can see that Legler/Smith (#17) and Marston/Brand #14 have already tacked onto port.  They were able to get a jump out ahead of the rest of the fleet with Marston/Brand rounding in first, and Legler/Smith right behind them.  This time both boats opted for the left gate, and stayed on the left side to try and catch the lift coming off the downtown skyline.  Nobody else would come close to catching them, but Legler/Smith were able to sneak ahead and finished in 1st, Marston/Brand in 2nd and Bodde/Callahan in 3rd. 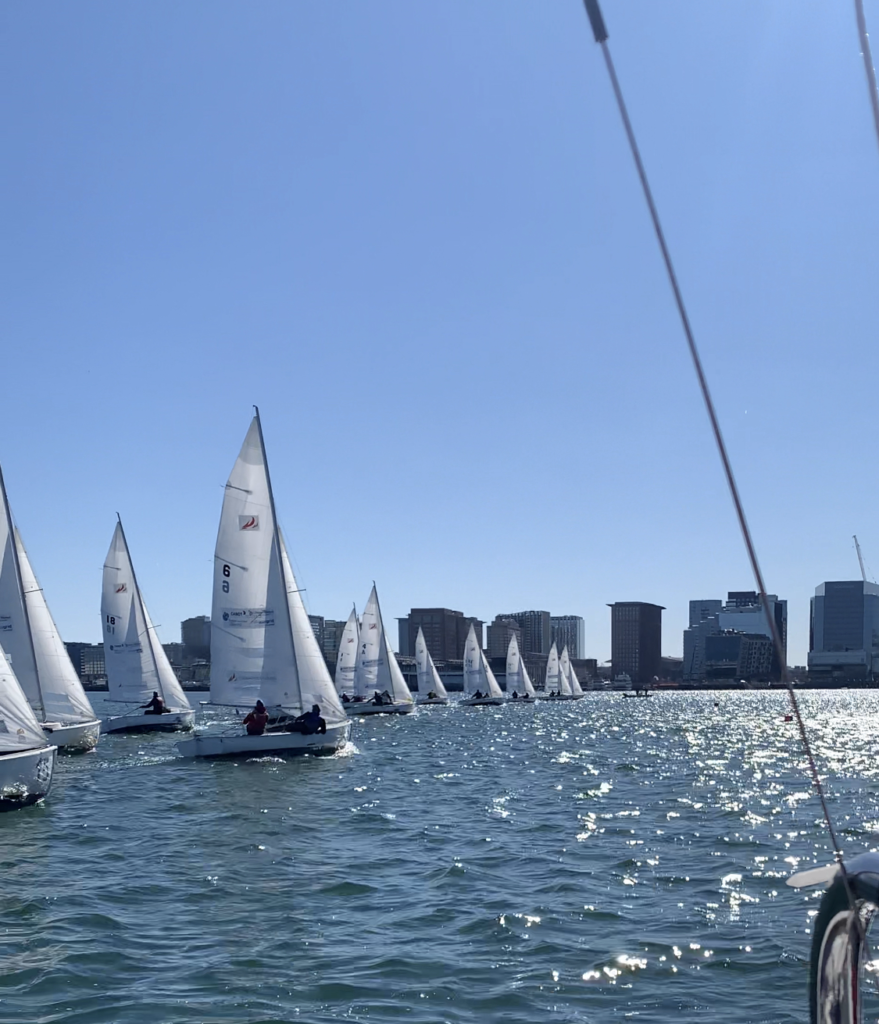 The wind continued to creep left as the day went on, and the start of Race 4 had a slight pin favor.  Most of the fleet tried starting down at that end, which left a big hole at the boat end.  Both Pratt/Coyle and Terry/Lucia started at the boat end, pretty far away from everyone else and immediately tacked onto port and headed for the right side of the course.  As boats went up the course, the wind seemed to  be swinging to the right again, and the boats that were stuck on the far left side found themselves in a pretty big hole.  While it seemed to be the winning strategy in the race previous, it was not to be the case this time.  Terry/Lucia and Pratt/Coyle maintained their sizeable lead and finished 1st and 2nd, with Marston/Brand coming in 3rd.

We noticed that the wind was still creeping left overall, and we were seeing some pretty significant drops in velocity.  Because of this we ended up shortening the course considerably, and moving it about 20 degrees left.  The line was still square for the most part, but depending on the timing of the phases, there was still a pin favor at the start.  Velocity was way way down, and most boats were still 1-2 boat lengths from the line at the start. 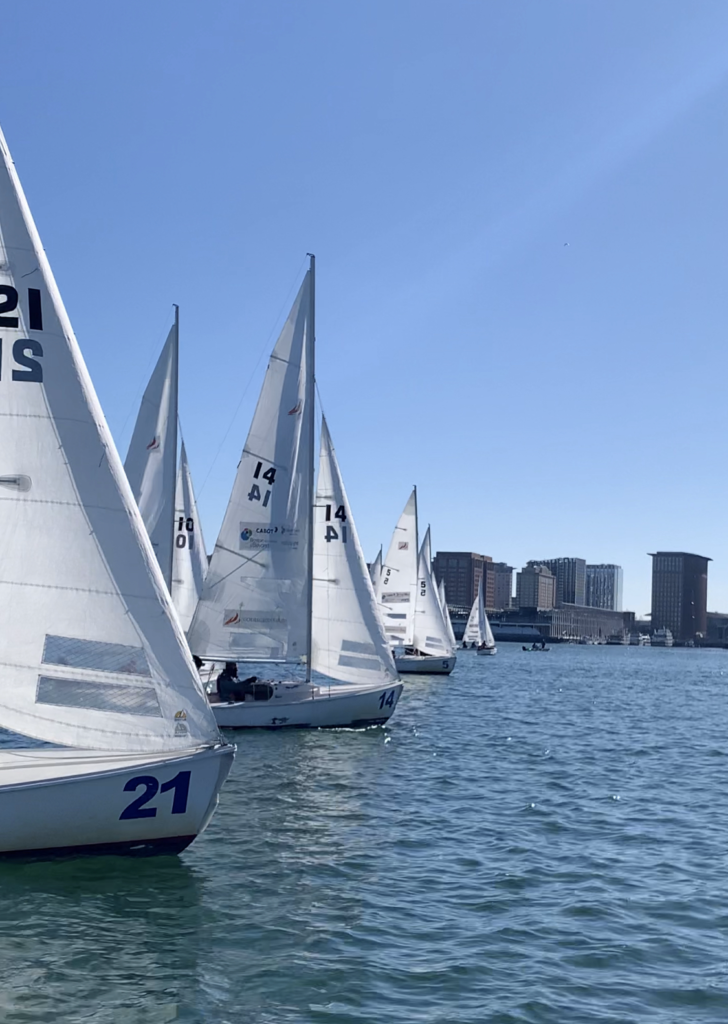 Here at the start you can see boats #5, 14 and 21 all pretty close up on the line.  The wind was still very light though, and quickly went hard left as it filled back in.  As the boats rounded the leewards the breeze was still up, and from the left and the top of the fleet were almost fetching the windwards as they headed up.  By the time the breeze evened out, the top of the fleet was too far ahead to be caught.  Terry/Lucia finished in 1st, with Marston/Brand in 2nd and Legler/Smith in 3rd.

Race #6 was a course 5 and would be our last race of the day.  The wind seemed to be even more unpredictable at this point with almost 90 degrees of difference between the wind angle.  But at the start it was again as far left as we'd seen it all day.  If we still had time for 2 or 3 more races, we probably would have paused and readjusted the entire course, but we were nearing the end of the day, and wanted to try and get the race off. 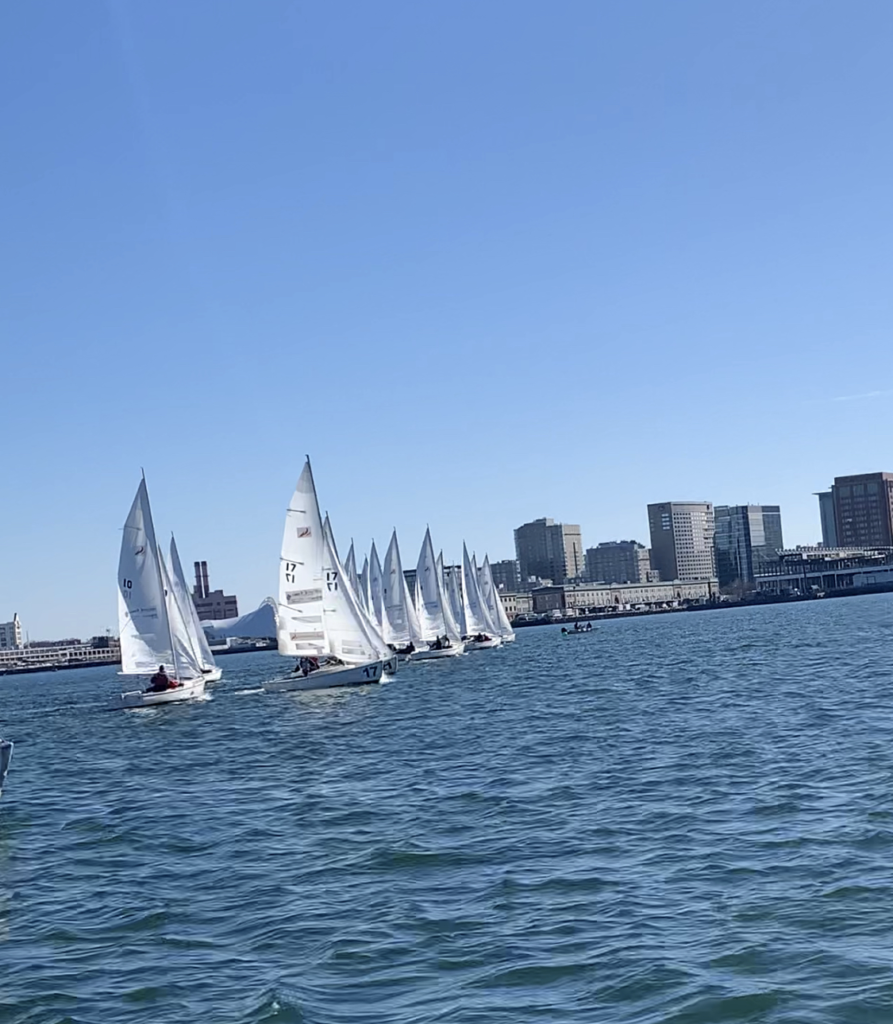 You can see Legler/Smith (#17) have already tacked onto port, while most of the fleet is bunched up at the pin end.  The breeze continued to frustrate the fleet as they made their way around the course.  Because we were moving the RC boat, I don't have many notes on the race, but I was able to witness and incredibly close finish where Robinson/Hebert were barely able to squeeze by Legler/Smith for the bullet.  Congrats!

And of course a special congrats to everyone who came out and raced on the day, especially our top 5 finishers who are...

Thank you everyone for another great week on the water!  I think enough has been said about protests and sportsmanship this week that I don't feel I need to add anything.  Other than the fact of how appreciative I am of this fleet's ability to self-regulate and self-police.  It is always a work in progress, and everyone has good and bad days, but I, like many of you, have seen a tremendous change in a positive direction over the years.  It's a major loss this year that we can't talk things out over a beer in a nice warm bar, but those days will be here soon.  In the meantime thank you all for making this fleet what it is, something that we are all proud to be a part of.

Looks like it could be pretty windy on Saturday, we'll keep our fingers crossed...