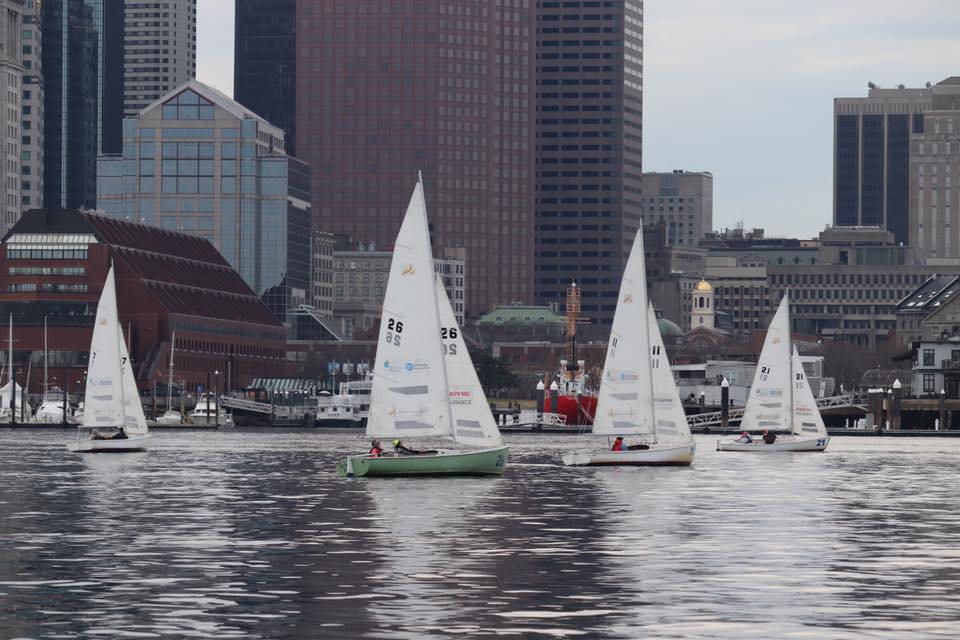 Many thanks to those of you who joined us on Saturday for another great day of racing.  We were extremely lucky that the weather was able to hold off and we were able to get five races in on a challenging and chilly day.  Temperatures on Saturday were in the low 30s/upper 20s. There sun was out earlier in the day, but by noon it had mostly retreated behind the clouds that would stay for the rest of the day.  Initially it looked like we would get some kind of precipitation starting at 2pm, but thankfully that would get pushed back as the day progressed.

By 11:45am the wind was coming from the NW at around 5 knots.  There was not much wind to be had, but luckily a strong outgoing tied allowed the boats to at least make it to the area of the race course.  By 12pm, the wind was dead. Over the next 20-30 mins the wind started to pick up a bit, and continued to shift right. The wind started coming from Pier 4 Charlestown, and by the end it would be coming from the Hyatt at the airport, well over a 100 degree shift.  Eventually the course would be set with a starting line about 30 yards up from the mooring field at Rowe's Wharf, with windward marks in line with the south end of the fuel dock in East Boston. An extremely strong current was running from left to right across the course.  With high tide at 9am, we were right in the middle of max ebb to start the day.

There was a general recall to start race 1.  Admittedly the pin was too high which led to a pile up at the pin end.  Due to the postponement for the wind to settle down and the general recall, we officially started race 1 at 12:35.  With about 30 second before the start, the wind abruptly shut off. Most boats were not up on the line, but Matt Marston / Cheney Brand, Manlio Lopez / Kris Kretsch and Marty Gallagher / Cindy Olsen were right there.  A fairly good sized pileup at the boat end caused quite a few slowdowns as well. The first downwind leg was very tricky. The light wind and strong current pushed everybody left as they were heading downwind. Michael McAllister's boat was the first to get to a leeward mark, followed by Marston/Brand and Angus Macaulay / Kyle Jachney.  They both had to sail directly into the current in order to eventually get to the mark. To start there was a big separation between the top 3 and the rest of the fleet. But a decent puff developed and managed to condense the fleet after the first few boats had rounded. The first three boats would all take the right gate and stay right, while Niko Kotsatos / Aeron Hurley, Steve Uhl / Rebecca Mount and Zack/Mike O'Brien managed to catch up and all go left.  However at the finish it was Peter Denham / Conant Brewer neck and neck with McAllister. In an extremely close finish Denham / Brewer would beat McAllister by a few inches, and Marston / Brand would finish third.

Race 2 saw some interesting starts.  One boat was OCS at the start, having been pushed over by at least one other, but the rest of the fleet was clear.  Kotsatos/Hurley had a strong start at the boat end, and Fletcher Boland / Allyson Schultz were almost halfway up the course in no time.  A slight lull on the downwind leg succeeded in stretching out the fleet some. At the leeward rounding Uhl/Mount rounded ahead of Kotsatos/Hurley.  Both boats would take the right gate and stay to the right side their second time up the course. Following them was Marston/Brand who repeated their strategy from race 1 of staying right.  The right side would indeed pay off, as those boats would finish in the same order in which they rounded the leewards.

A general recall for Race 3 meant that we restarted with the 1 minute rule in effect.  A strong right shift at the restart caused some minor chaos, but all boats managed to remain clear until the start signal.  Chip Terry / Dave Lucia were right on the line with quite a bit of speed. Nowhere near the line was Jen Bodde / Leo Gaskell.  They were the last ones to cross the starting line by quite some time, and Jen jokingly asked that I take note of how "awesome" their start was.  Despite their "awesome" start, they did not give up. In fact they managed to pass 14 other boats to come in 6th in that race, proof that you should never give up!  However, just because you didn't give up, doesn't necessarily mean that you will catch up. And in this race, no one could catch up with Gallagher/Olsen. They rounded the leeward marks while the rest of the fleet was only halfway down the leg.  They would round and go right, followed by Terry/Lucia and Reade Everett / Amanda Lyall, as well as a few others. Lopez/Kretsch rounded and went left and were able to pick up a few boats and come in fourth.

Race 4 started with all boats clear.  The three boats that appeared to have the best start were Boland/Schultz, Everett/Lyall and Marston/Brand.  Sometime between races 3 and 4 the current started to die down. Also, the right side stopped being as favored, and it seemed that the left side of the course was now the place to be.  Those boats that had been rewarded by constantly going right found themselves in serious trouble as constant lifts on the left side kept helping that part of the fleet. Everett/Lyall would follow this advice and with their strong start, managed to work out a sizeable lead at the leeward rounding.  They would both take the right gate, but in a short amount of time managed to make their way over to the left side of the course and would not be caught. Marston/Brand, having learned from their mistake in Race 3, went left and managed to come in 3rd.

At 2:40pm we started Race 5.  Luckily the precipitation had managed to hold off for the most of the day, until the start of Race 5.  At that point were greeted with some kind of mixture and snow and rain, but fortunately it was fairly light.  At the start Macaulay/Jachney and Terry/Lucia had a great start in the middle, while Gallagher/Hayes shut the door at the boat and sped off.  At the leeward rounding it was in every way a tie between Marston/Brand and Gallagher/Hayes. Both boats approached the gate at the same time.  Also at that point, both boats had exactly 22 points on the day. Marston/Brand went left and Gallagher/Olson went right. In the end Gallagher/Olson would emerge victorious, finishing a few boat lengths ahead of Marston/Brand.

It was an extremely close day all around.  The top three boats were only separated by four points, and every single boat had at least one finish in double digits.  On a day that was every bit inconsistent, it became increasingly challenging to stay consistent, and it showed in the results.  Congrats to everyone for making it through a challenging and exciting day,

One last thing I would like to mention is the overall conduct and behavior of sailors on the racecourse.  In general it has been great, but on Saturday there was an incident. We don't need to get into details here, but suffice to say I firmly believe that it won't happen again.  But I do want to take a quick second and remind everybody why we do this. It's always good to stop and think about this. Why do we do this? Why, when everyone else is staying home and avoiding the elements, do we put on an obscene amount of clothing and go sit in a 19' boat with zero protection from the cold?  Those on the outside might consider some kind of clinical diagnosis for us. But you know that's not true. You do it because you love it. You do it because it's fun. And you choose to do it at Courageous Sailing because of the quality of racing, the level of competition in the fleet, and the camaraderie and the mission of Courageous sailing.  We all take these things very seriously, and we are very proud of it.

If you feel that there is any way in which the quality of racing can be improved, please let us know.  It will happen that we will occasionally make mistakes and things may not always be perfect. But we want you to have the absolute best experience you can, despite the fact that you're sailing a tiny boat in the freezing cold.  So please, talk to us. We're listening.

We believe that the level of competition speaks for itself here.  This is an incredibly strong fleet, and it has only been getting stronger.  The difference between 1st and 10th is not much more than a half-decent start and a bad tack or two.

And lastly we are extremely proud of the camaraderie and civility in our fleet.  Our frostbiters are our best ambassadors. You are our strongest sailors, our biggest supporters, and our beginners look at you with awe (and abject disbelief) and aspire to be a part of this community one day.  And it's this I'd like to focus on the rest of the season, community. I know it's very easy for things to get heated out there. I understand that this is an extremely high level of competition, and there are going to be instances where people disagree and get upset.  This is a natural consequence of what we do. However, I believe that when we get upset and disagree, we can still treat each other with a level of respect and civility becoming of ambassadors of Courageous Sailing. At a time when civility and discourse seems to be at an all-time low, let's take a different tack and remember that we're all part of the same community.  We are a very small group of dedicated (some might say crazy), passionate, and wonderful people who love sailing so much they don't care what the temperature is. It shouldn't be too hard to find some common ground. Let's continue to be those amazing ambassadors, not just for Courageous, but for the sailing community in general. You have been doing such a great job so far, and I am excited to see this continue in the second half of our season.

There was a glitch in the series scores earlier this week, but they've now been fixed.  You can check them out here.

We'll be back on Friday with our Week 9 preview.  In the meantime have a good rest of the week!

If you are coming down to the pier, please fill out your symptom notifier! Symptom Notifier
Black Friday Deals won't last long! Lock in our lowest prices on courses and membership for the 2020 season before 12/3! Black Friday Sale