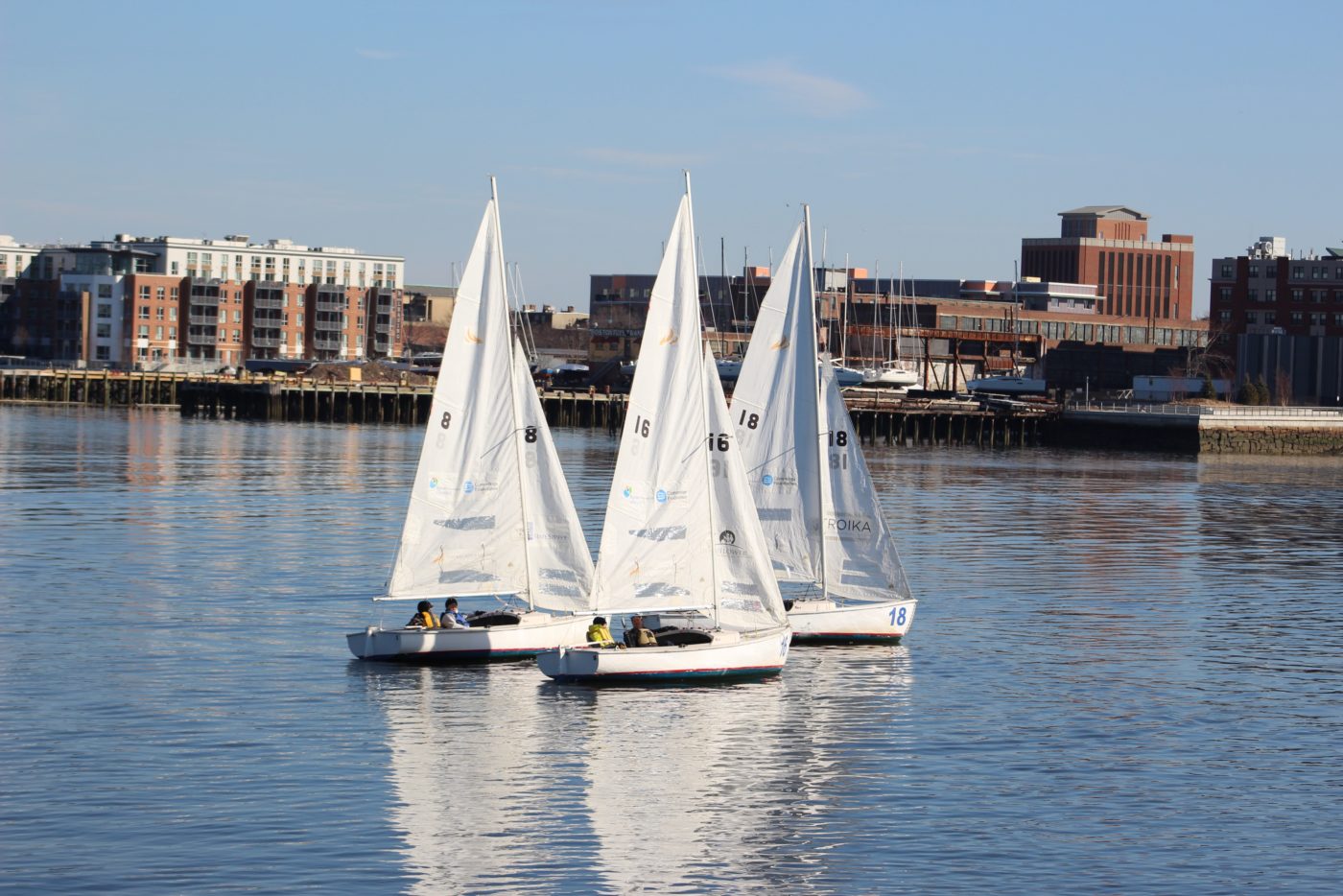 Week 9 was certainly an interesting one, that's for sure.  In what was most likely the most challenging day we've had so far, there were sixteen boats trying to figure out just exactly what the wind was doing at any given moment.  There were massive currents, 180 degree shifts, and unmerciful dead spots that could drop you ten places. But if you were able to stay consistent and not overcommit, you could find some success out there on the course.

To start, the conditions were fairly pleasant.  It was cold, and temperatures struggled to make it out of the 20's.  It certainly didn't feel like anything in the 30's. Luckily the sun was out, which is always a big help.  The forecast on the day was calling for WSW winds at 5-10 knots. This forecast seemed to appear correct as we were leaving the dock, when we got out to the course there was a fairly steady, albeit light breeze blowing from the Fort Point channel.  Within a few minutes the wind start clocking left, and every few minutes it seemed to go further left. Eventually we had a sea breeze, with SE winds at 5-10. Then it went further left, with the breeze coming from the Hyatt in East Boston. The wind appeared to settle in this direction, and we were able to drop our marks.  Of course as soon as we did this, there was a 180 degree wind shift from SSE to NNW. Not ideal. Eventually, after the wind had circled all around on us, it started to settle in again, from the direction of the Fort Point channel and we were able to set a course.

The tide chart that day had high tide at 9am and low tide at around 330.  As we were sailing out, our perspicacious fleet noticed an extremely strong outgoing current.  Once again, they were pumping out the Charles River while we were on the race course. The less dense freshwater was running out on top of the saltwater, while the tide still continued to rise.  Interesting stuff.

A big left shift and a slightly-too-high pin made for a very crowded start at the pin end.  From my perspective it was tough to see who got off to a good start, but it appeared that Sandy Hayes / Cindy Olsen had a very strong start as well as Michael McAllister / Annya Tisher.  While most boats were struggling for a lane at the pin, Chip Terry / Dave Lucia were white-knuckling their way to a port tack start close to the boat, and somehow it worked for them, getting out on top of the fleet quickly.  It was tight at the leeward roundings. Three boats had distanced themselves from the rest of the fleet: Hayes/Olsen, Terry/Lucia, and Zack and Mike O'Brien. Terry/Lucia was able to establish overlap before the zone and rounded the right gate just inside of the O'Briens.  Hayes/Olsen would instead opt for the left gate. Unfortunately that move would not work out for them. A good sized hole opened up on the left and dropped them a few spots. Matt Marston/Cheney Brand would jump up into the 3rd spot behind Terry/Lucia and the O'Briens.

Race 2 started with a tight group at the line, and one boat OCS.  Quickly the wind died and went very hard right, stopping most of the boats in their tracks.   But that didn't stop Hayes/Olsen who had another good start and were moving with good speed, despite the wind change.  Terry/Lucia somehow managed to start again on port tack and were able to find some clear air. A good number of boats found themselves a little stuck at the boat end, as heard here.  At the leeward rounding, Terry/Lucia managed to eke out a 30 second lead on everyone else. The next five boats were all very close to each other.  John Pratt/Bob Coyle would round in second, ahead of Hayes/Olsen. Rounding in sixth was McAllister/Tisher who jumped up all the way into second place at the finish.  But they could not catch Terry/Lucia who got their second bullet of the day. Pratt/Coyle would come in third.

Race 3 had a lull at the start and most boats had a hard time moving.  Pratt/Coyle waited for a hole to open at the boat and cruised in with good speed ahead of everyone else.  Angus Macaulay/Kyle Jachney followed suit and were a few seconds behind them, also with good speed. I was able to record 30 seconds of prestart, as well as the first minute or two of racing.  You can check it out here!  The breeze would pick up during the first leg and there were three boats together at the leeward rounding.  It looked like Macaulay/Jachney were ahead from my angle, but Pratt/Coyle were able to get inside and call for room.  Slightly behind those two boats were Terry/Lucia. All boats took the right gate and headed up. On the next two legs Terry/Lucia were able to pass Macaulay/Jachney, but not Pratt and Coyle who got the bullet.

Race 4 had another lull with a strong right shift, making for a challenging start.  Pratt/Coyle and Marston/Brand both had very good starts. It appeared as if Macaulay/Jachney had won the boat and shut the door, but Terry/Lucia somehow managed to squeeze their way in.  They would be first to round the leewards by quite a bit, distancing themselves from the rest of the fleet. Rounding in second were Macaulay/Jachney who followed Terry/Lucia around the right gate.  The next seven boats would also follow suit. But not McAllister/Tisher. They rounded somewhere in 9th or 10th place and opted for the left side instead. It was a shrewd move that paid off, jumping them all the way up into 3rd place, behind Marston/Brand and Terry/Lucia, who would pick up their 3rd bullet in this race.

Race 5 ended up being the most important race of the day.  Terry/Lucia had been uncatchable all day, and after four races they were at 5 points.  Pratt/Coyle had 12 and Marston/Brand had 14. At the beginning of the start, a very big left shift settled in.  We almost considered shifting the windward marks to accommodate this, but opted to keep the course as is, figuring that the wind would settle back in.  We moved the pin down a bit, but still there was a huge pile. The majority of the fleet was down at that end when the race started. That would have been fine, but almost immediately a giant hole developed on the left side, quickly stopping everyone. Except Pratt/Coyle.  They opted to avoid the mess at the pin, waited for their lane to open up, tacked on to port right as the final horn sounded, and they were off. You can watch a video of the start of race 5 here.  Initially I was concerned that the fleet would be able to fetch the windward mark from the line.  Luckily the wind would come back a bit and even out. The wind did not come back however on the left side, stranding a lot of boats who had appeared to have a good start.  By the time the fleet reached the leewards the velocity had picked back up too. Hayes/Olsen rounded in first and would take the left gate. Rounding behind them in second place were Sandra Lemack/Pam Troyer.  Both of those boats would head out left. The next three boats were Macaulay/Jachney, Pratt/Coyle and Neal Goldman/Jennifer Rousmaniere. It appeared that the right was the way to go because Hayes/Olsen and Lemack/Troyer would drop some, while Macaulay/Jachney and Pratt/Coyle would come in 1st and 2nd, with Hayes/Olsen dropping to 3rd.

It was an extremely challenging day, and the last race would prove to be the most challenging.  A double digit finish for both Terry/Lucia and Marston/Brand meant that Pratt/Coyle would win the day by three points.  They had an extremely consistent day, never finishing worse than 4th place. Congratulations! And a congratulations to everyone for managing to get the boats around the buoys on a ridiculously challenging day.  The constant shifts meant that it was almost impossible to game plan. I'm sure it was a frustrating day for some on the race course, but from my view it seemed very exciting. Our top 5 finishers on the day...

Don't forget to check out the scores.  Next week is Week 10, which means it's the end of Series 2.  We will be giving away prizes over at Pier 6 afterwards, so please make sure you join us for that.  We'll be back on Friday with our Week 10 preview. In the meantime I hope you all have a great week.