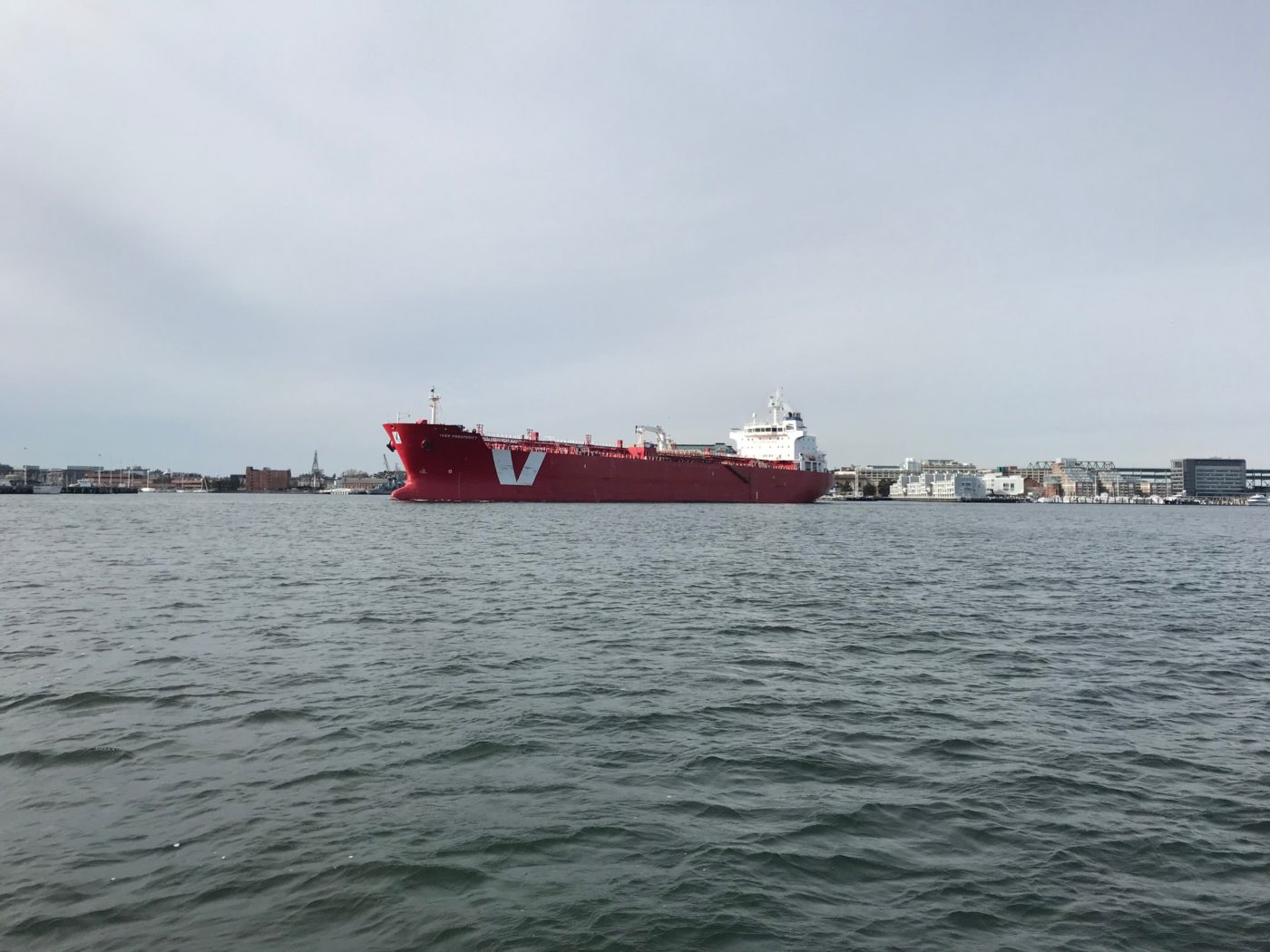 Rush hour in Boston usually occurs weekdays between 7-930am and 4-630pm.  However, occasionally rush hour will occur on a Saturday at 2:30pm, and it doesn't happen on I-93 or the Pike.  Apparently a tug and barge convention was going on this week and we had more traffic than we've seen this year or others.  Despite all of that, we were able to get in six races on a great day on Boston Harbor.

On this day it looked like the weather would be tricky.  The forecast was calling for the wind to die and switch directions.  By 1030 the wind started to shut off and by 11 it was completely dead.  By 1115 we could see a little movement on the tell tales of the Rhodes.  And by the time it was 1130 the sea breeze had kicked in from the southeast at 5-10 knots and we were good to start racing.  The temperatures were warmer than usual for this week in February.  With the sun out for most of the day, it felt like mid 40's, which is always a bonus.

This week our course was set in a slightly different location.  There was a tug and barge anchored in the spot known as Anchorage #1.  This is the area in between the Hyatt and the Nantucket light ship, and opposite the ICA.  The J24 fleet from BSC was set up closer to our usual location.  With the wind coming straight down the mouth of the harbor the only place for us to set up was with windward marks near Pier 1 East Boston and the starting line near Burroughs Wharf in the north end.

Prior to race 1 we had a breakdown on the course.  While doing nothing but sheeting in the main, we managed to have a boom snap in half.  This is obviously, never a good thing, but luckily no one was hurt and everything was fine.  The problem was quickly fixed by the quick thinking of staff members Jesse Hamilton and Martin Weissgerber who had the boat anchor near the course, and simply brought them a new boat, rather than spend a long time replacing a spar.  Race 1 itself was equally exciting with a general recall at the start.  There was still one boat OCS at the next start, which meant they had to round the RC boat to clear themselves.

We shifted the entire starting line to the left during the middle of Race 1.  During the start it was apparent that we were a little too close to the Boston side of the harbor, and were interfering with the operation of the Rookie, the small Navy Yard ferry that runs every 15 minutes.  John Pratt and Bob Coyle were the first to the leeward rounding.  Rounding behind them by 20-25 seconds were Jen Bodde and Dylan Callahan.  They and the next four or five boats all took the right gate and went right.  Chip Terry and Tom Curtis were the first to take the left gate and used it to gain a few places and come in 3rd.

At the start of Race 2 it was Niko Kotsatos and Leone de Klerk who got off to a good start and out to the right side of the course along with Cindy Olsen and Sandy Hayes.  At the leeward rounding there were four boats that essentially rounded at the same time.  Pratt/Coyle and Zach O'Brien and Michael O'Brien took the left and Kotsatos/deKlerk and Hayes/Olsen went right.  Team O'Brien appeared to grab some kind of lift along the East Boston shore and took 1st place by eight both lenghts.

Race 3 had two boats round the leewards at the same time, except this time it was Dana Robinson and Matt Hebert going left, and Bodde/Callahan going right.  Bryan Lee and AnneMarije Veenland-Lee and Terry/Curtis rounded in 4th and 7th respectively, and managed to jump up into 2nd and 3rd by the end of the race.  Before the start of race 4, the Iver Prosperity, a large tanker,  was clearing the McArdle bridge in Chelsea, and was outbound for sea.  We decided that instead of the usual course 4, we would run a shorter race, a course 2, in the hopes of squeezing in a race before having to delay for the tanker.  With no leeward rounding, just a simple up and back, Terry/Curtis took the bullet ahead of Hayes/Olsen and Kotsatos/deKlerk.

After a ten minute delay for the tanker, we were able to resume racing again.  Terry/Curtis continued their hot streak and rounded the leeward marks with the next boat about 8 boat lengths behind.  Olsen/Hayes and Bodde/Callahan were the next closest, but no one would be able to catch them.  During this the tug and barge that were anchored in anchorage #1 decided to pick up anchor and head up Chelsea Creek.  But this tug and barge was going to wait for another tug and barge that was coming up behind them.  Once those two were out of our way we had not wait another few minutes for yet ANOTHER tug and barge to come by, this one headed outbound.  And during this mass migration one of the boats managed to snag the RC anchor, which was tied to a float.

Once we had re-anchored ourselves, we were able to start our 6th and final race.  Yet again at the leeward rounding it was Terry/Curtis who had a 10 second lead.  Kotsatos/deKlerk were coming in hot behind them and went right, while Terry/Curtis went left.  During the last leg, Kotsatos/deKlerk managed to pass them for the last bullet of the day. The great finish wasn't enough to catch Terry/Curtis who had an extremely solid day with 14 points, never coming in worse than 4th place.  This is especially impressive considering every other boat had at least one finish in 10th place or worse.  Well done to those two, and to everyone who raced on Day 12, and to our top 5 finishers who are...

After racing, a sizeable contingent retired to Pier 6 where prizes were awarded for Series 2.  Because of their incredibly strong showing on Day 12, the team of Angus Macauley, Kyle Jachney and Chip Terry were able to jump into 3rd place and take home some hardware.  Marston/Brand came in 2nd with another strong showing.  But it was Mark Lindsay with Jim Watson who had a dominant run in Series 2.  They raced 4 out of 5 weeks and came in 2,1,1 and 1.  Also it should be noted that the 2nd place was actually a tie for first place, and they lost the tie breaker.  Well done.

We will be back again this Saturday.  The weather looks okay so far, but more on that Friday.  I should mention that I will be here this coming Saturday(Day 13), but I will be gone for weeks 14 and 15.  I will be back for the last two weeks of the season.  In my stead, I will leave you in the very capable hands of Carl Zimba who is our P.R.O. for pretty much everything at Courageous that isn't Frostbiting.

I hope you all have a great short week, and we'll be back Friday with a look ahead to Day 13.