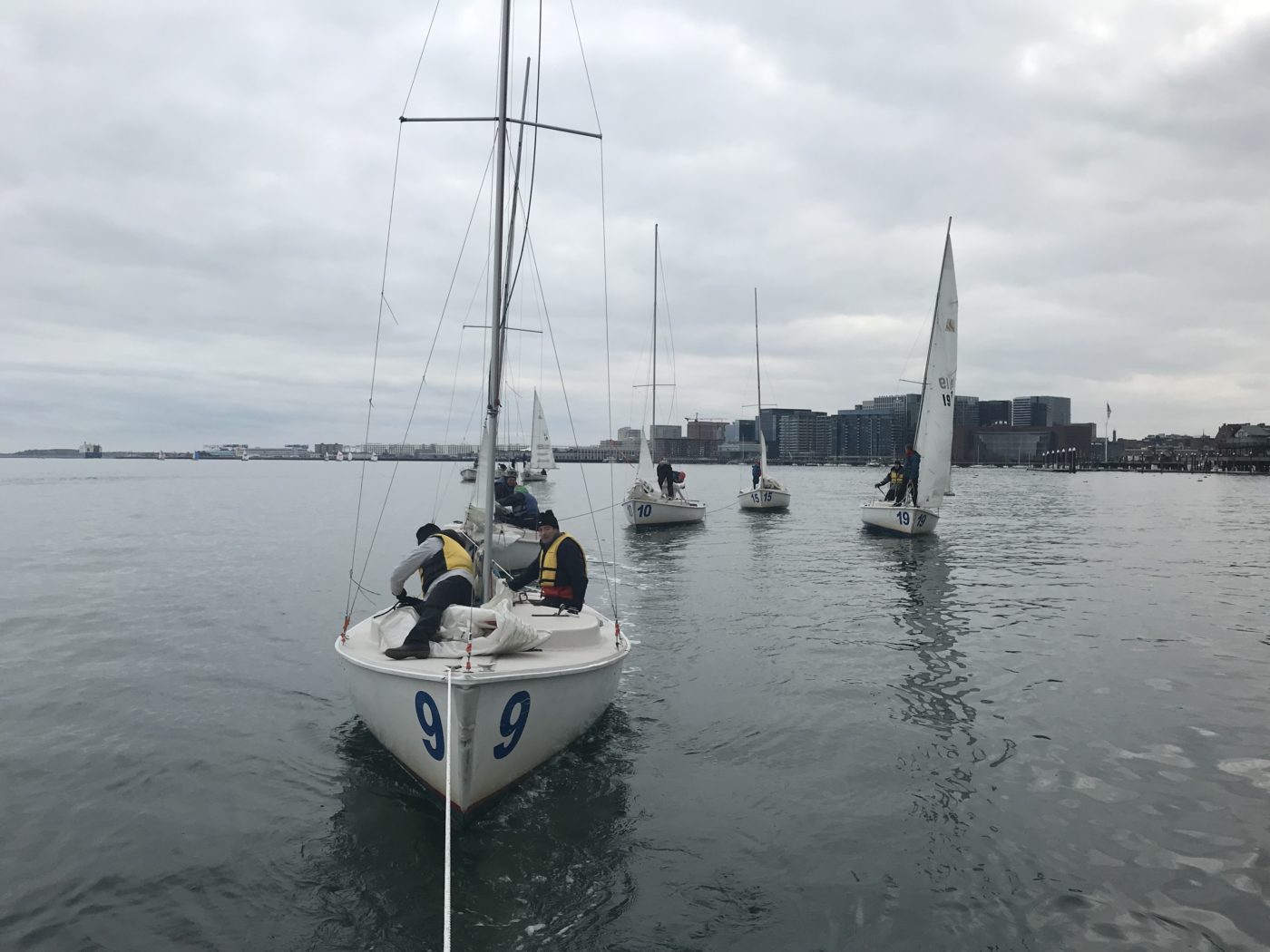 Despite the wind being dead calm, a stronger-than-usual current, and major commercial traffic rolling through, we still managed to squeeze in one race. It may not sound like much, but it was looking like the whole day would have to be called.

The forecast for Saturday was calling for 0-5 kts out of the Northwest. By the time of the skippers meeting, there was just enough breeze to give racing a shot. And so, our nineteen boats headed out towards our usual starting location by Piers Park and the Nantucket. But before the fleet had even reached the cost guard base, the breeze completely died. An outgoing tide was the only thing moving the boats, and we drifted our way towards the course.

As we were drifting, two oil tankers approached the course, one heading inbound, the other outbound. They ended up passing each other right in front of Piers Park and the Nantucket, and our fleet was forced into the mooring field off of Rowe’s Wharf. As we were sitting there, waiting for the tankers, a slight breeze started to blow out of the Southeast. The skies had been clear all morning, and despite the low temperatures, a sea breeze was able to develop. The minute the tankers had cleared we were able to start a race, much to the delight of our patient fleet.

At the start of the race, there were two boats  OCS. They were both attempting to come from above the line, duck below it, and head back up, but were unable to fully clear themselves in time.  As with any light wind day, the key was to keep moving and watch out for current. The tide height on Saturdaywas 11.36 ft, which is about 1.5 ft higher than usual. That means the current was really ripping, and with max ebb being from 12-2pm that day, we were right in the thick of it.

Congrats to Michael McAllister and Annya Tischer who, in their first week back, managed to find some clean air and get the days only bullet. They stretched their lead on the last downwind leg ahead of Matt Hebert and Dana Robinson, who came in second. Places 3-7 were all extremely close, making for a very exciting (albeit slow) finish. Congrats to all our racers and also to our top five finishers

As the first half of the fleet was finishing, and the second half were making the turn downwind, the sun went away, the temperatures dropped and the wind died. With no wind and the strong current it was certainly a struggle to get those last few boats over the line, but they did finish, and our one race was officially in the books. With another large ship on its way out, the decision was made to head in and head for the bar, but not before a (perfectly executed!!!) group tow back to the dock.

Speaking of the bar, Pier 6 is having their holiday party next week which means we are going someplace else. We will try Brewer’s Fork, located at 7 Moulton st in Charlestown. While it is a little farther away than Pier 6, it is not unmanageably so. We hope to see you there for some post racing festivities.

Week 3 also saw the election of our Fleet Captains. We want to extend a big thank you to Matt Marston, Mark Lindsey and Marcelo Pereira for accepting the nomination. All three are great representatives (and great people), who have been with us for a long time. Please make sure to introduce yourself to them if you haven’t already done so.

We’ll look more at Saturday’s forecast in or preview on Friday, but right now it’s looking like there’s a decent chance of some precipitation. This could take the form of either some really cold rain, or our first snowfall of the season! But this being New England means this is all subject to change at a moments notice.

Thanks again to all who came out and managed to steal a race from the wind gods. Hopefully there will be more next week. We’ll be back on Friday with our Day 4 preview, but in the meantime have a great week everyone.

Nate and the Courageous Frostbiting Team