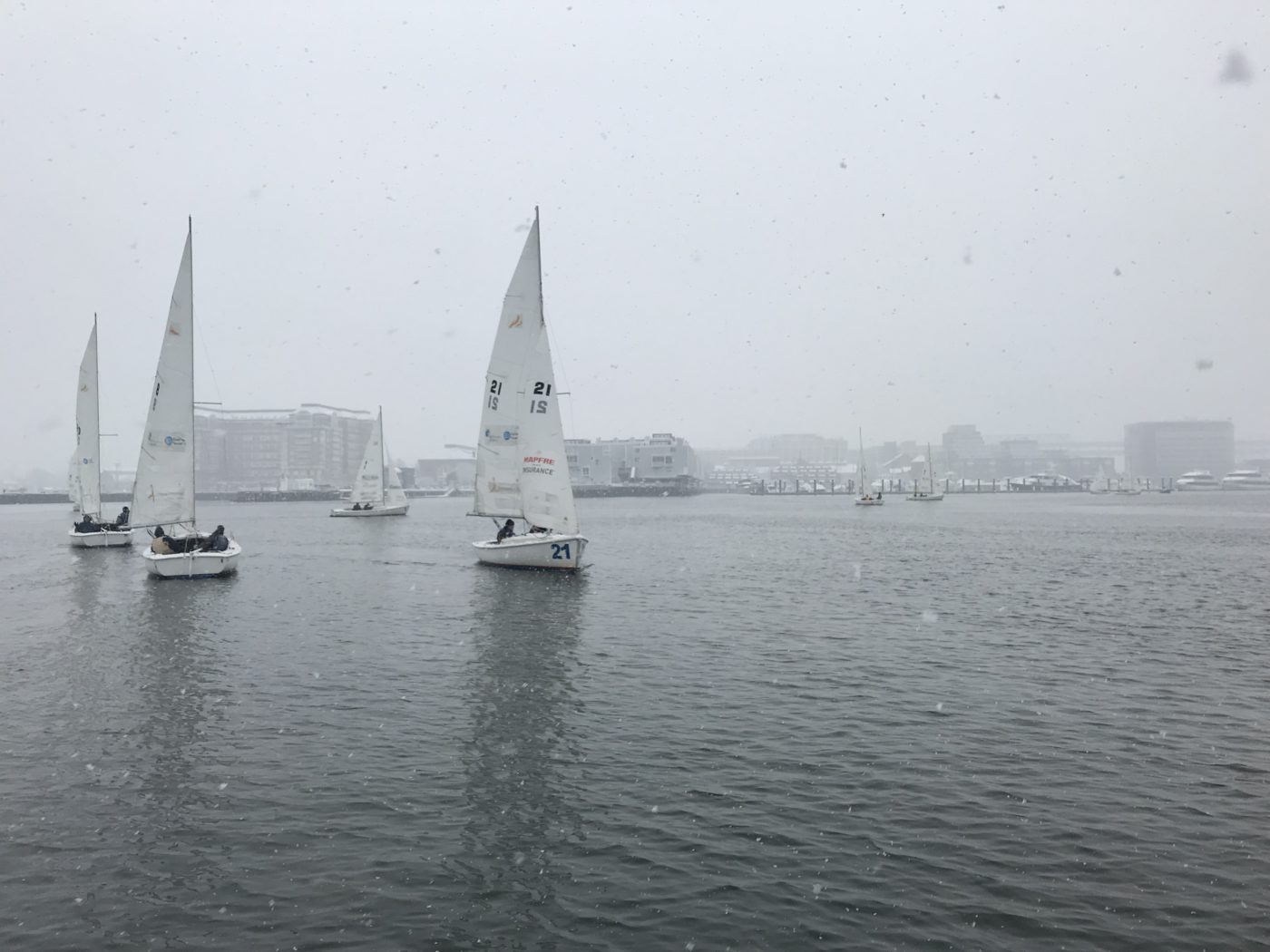 Snow, shifty breeze, freezing rain, no visibility, swirling currents and tankers were just a few of the challenges faced on Day 4.  In the days leading up to Saturday, no one could agree just how much snow we'd be getting.  Forecasts varied from one to seven inches, with periods of freezing rain.  It was going to be messy.  But that didn't stop the thirty-eight brave souls who ignored the mental health diagnoses from their friends and loved ones, and went sailing instead.  As the fleet began to arrive, big, fat, wet flakes started to fall.  Temperature was hovering right at 32 degrees, and from that point on it was either wet heavy snow, or stinging freezing rain.  That was not the problem however.

The problem was that there was no wind.  The days forecast called for North winds at 5-10 knots, but at 12pm there was nothing more than 2 to be found anywhere.  With a tanker scheduled at 1230, the decision was made to postpone until at least the ship had passed.  As the tanker was approaching Charlestown, the wind started to pick up ever so slightly.  By the time the tanker passed Pier 4 at 1245, the fleet was already rigged and heading out to the course.  A nice breeze had developed coming down the Mystic River basin from the Tobin Bridge.

The rest of the day would see wind speeds anywhere between 5 and 11 knots from the NNE.  The course was set with the RC boat very close to the edge of the channel by the Eddy Building in East Boston, and windward marks close to Charlestown marina and pier 8.  Usually during Frostbiting, the race course is farther out, in the vicinity of the Nantucket.  But because of the light wind, limited visibility, and wet cold conditions, the course was set closer to home.  With low tide being at 930, by the time the races started we were at max flow.  A strong current was running from left to right across the line.

Race 1 went to Niko Kotsatos and Thomas Berand.  On the last downwind leg they went far left and were able to sneak in ahead of Marston/Brand and Hebert/Everett who were farther right.  As the last boats were finishing another tanker announced she was departing from Chelsea creak.  Because of our location in the Mystic Basin, we were forced to pick up all marks of the course, and send everyone to the East Boston side.  After about 10-15 minutes the tanker suddenly appeared out of the fog about 100 yards away.  He was able to pass by us with ease, but not before expressly thanking all of our boats for keeping clear and making his job easier in challenging conditions.  Thank you all very much for helping us keep a good relationship with our neighbors.  And we at least got to have a pretty good snowball fight during the delay.
After the tanker had passed, the marks were reset, with windward marks set a little farther to the right to compensate for a right shift that was developing.

During the start of the second race, a harbor ferry and a tugboat were coming through the course.  The two Courageous safety boats were able to make a lane for them to pass along the Charlestown side.  However, because of this they were not able to replace the leeward gate before the first boats were headed downwind.  So the course had no gate.  In the event that there is no gate, boats should use the pin as the leeward mark, rounding to port.  And that is exactly what they did.  It was Mark Lindsay and Jaimie Chicoine who took the bullet for race 2, and who also managed to keep their boat practically snow-free all day.  Matt Marston and Cheney Brand were close behind again, for another second place finish.

The leeward gate was replaced and Race 3 saw the Kotsatos/Marston rematch from race 1, this time with Matt and Cheney picking up the win.  Heading into the last race, Marston/Brand had a one point lead over Kotsatos/Berand.  Race 4 went to Hebert/Everett, but the day went to Kotsatos/Berand who sealed the day with their second-place finish.

Congrats to our top 5 finishers on the day...

I asked Niko to share his thoughts on the day, and he very kindly responded with a great piece on the day, and racing in general.  I've included them at the end of the recap.  Please take the time to read it, it's well worth it.  There's a ton of helpful information from beginning to end.  In the meantime, thanks again to everyone who showed up despite a terrible forecast, and somewhat miserable conditions.  We were the only sailboats on the harbor that day, and we'll do it all over again next week.  Please try and come to Pier 6 after racing next week.  We will have food and prizes for the top 3 finishers for the "fall" series.  You can check here for all the current scores and standings.

Also, thanks to Peter Denham for sharing an awesome video which I've linked to here.  If you weren't able to come out on Saturday, this will give you a little idea of the conditions.  And be sure to check our Facebook page here for more videos and photos.
Thanks to everyone for coming out and sharing a uniquely Courageous Sailing experience.  We'll be back on Friday with a preview for day 5.  Enjoy the week!
Best,

-Nate and the Courageous Frostbiting Team

And now as promised, here are Niko's thoughts....

Hey frostbiters,
I wanted to thank you all for letting me and Carolyn and our teammates join you so far this Fall. The fleet has been great, with tight racing, and friendly chatter afterwards. Thanks also to Nate and the CSC team who get us on the water every week and keep the boats running. They asked me to write some thoughts on yesterday, so here's what I've got.

Lot of thoughts on current here. Because fresh water floats on salt water, the current in estuaries often flows out even when the tide is flooding. This is even more true as we approach high tide typically, and for the Charles, during the first half of flood tide because they actively pump that river most days between low and mid (or higher) tides. It's very rare that the current where we sail is actually coming in in the channel, though there are areas near East Boston and the edges of the course that you can find eddies curling back up-current. The current is even more crucial in light wind, as it's a bigger percentage of your speed.

The 1st race, we knew the current was going left to right both because the committee boat was pointing towards the pin (rather than into the wind) and because we could go CB-Pin much slower than we could Pin-CB. From this, we assumed the fleet would get compressed towards the committee boat, leaving the pin less crowded. Also, we wanted to start towards the pin to be up-current, and spend less time fighting it on starboard, and more time with it on port. We weren't sure if this current assist would help us with the windward mark layline so far up the mystic, and indeed, current was more neutral up thjere.

By the time the tanker passed, the current had switched, and the breeze had slid right, as evidenced by the committee boat pointing just to the right of the breeze. This was pushing people away from the boat (towards the pin) and also back from the line, making the fleet late. We were head and shoulders ahead of most at the start, and Nate says we still had a bit of room. Also of note, a hole opened behind us at the boat due to the current, and the top two finishers were in this, and tacked out early. This early tack got Mark and Matt into a good shift/puff on the right, but also towards the shallower water's edge, where the adverse current was less, if not eddying favorably.

By race three, and into race four, the Mystic was ebbing strongly, pushing boats back from the line, and also making the boat end of the line favored because it was up-current. Lastly, this current set boats who thought they were on the layline, making it hard to fetch the windward mark. Also, as the current strengthened, parallel to the wind direction, it decreased the apparent wind, which was most noticeable if we tried to wing on a righty downwind. We found we could easily reach on port or starboard until we got a puff from the left (charlestown) and then wing easily in that pressure which was oblique to the current direction.

Lastly, I highly recommend doing some drawings of your own of what happens when the current and winds change. This is typically a geometry exercise, with laylines and ladder rungs shifting, leeway growing, and different effects on apparent wind and speed over land depending on your board. I leave you with a diagram (attached) I drew a couple years ago with my best guesses at current in the harbor.