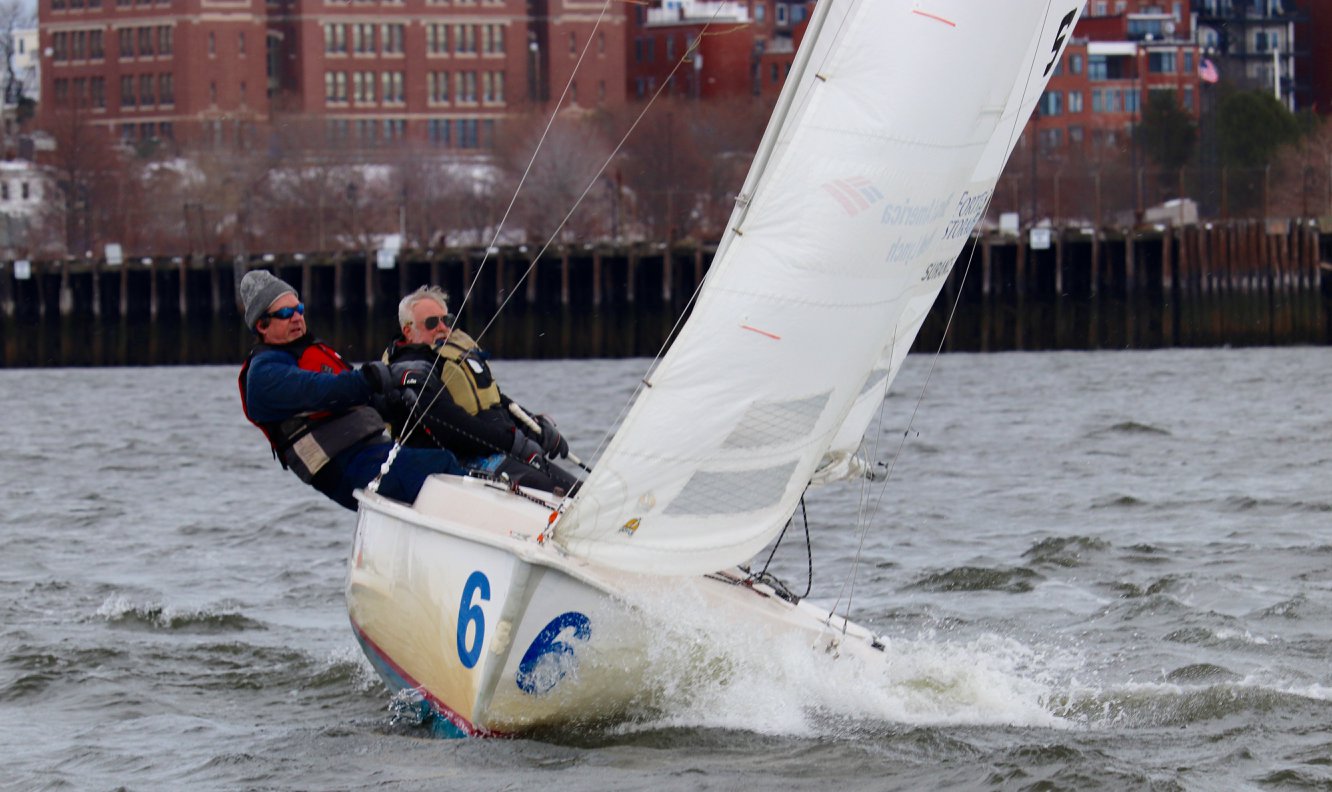 The winds were howling on Saturday, so much in fact, that we were forced to come off the water early.  But not before we managed to squeeze in three races on the windiest day in which most of us have ever sailed a Rhodes 19.  On Friday the NWS had issued a small craft advisory, but by Saturday morning that had turned into a gale warning.  However by 1130 we weren't seeing anything above 30, so we decided to head out and race.

With winds out of the West, the course was set in the usual location, but with a bit more space between our starting area and the East Boston shore.  Windward marks were set by the Marriott at Long Wharf.  Wind speed at the start was averaging around 20 knots.  The lulls would drop to 10, and the gusts were approaching 30.  Before the start of Race 1, one of our boats lost a backstay.  It broke up at the top of the mast, so it was impossible to inspect this sort of thing ahead of time.  But all boats should remember to check every pin and stay before heading out.

A very strong gust within the last minute of the start of Race 1 made for a big line sag.  Many boats were way downwind of the line when the final horn started.  The first boat to the leewards was Kyle Jachney and Spencer Powers followed by Jen Bodde and Dylan Callahan.  Bodde/Callahan started second or third row at the start, but went right early, tacked off, and rode a big righty all the way into second place.  Just behind them was Claas Willem Visser and AnneMarije Veenland-Lee.  The three boats would hold their places for the finish, staying in the same order.

At the start of Race 2 it was Bodde/Callahan who won the start.  They were closest to the line, on the pin end, and had plenty of speed.  There was another strong gust at the start, but it managed to lie down a little for the first upwind leg.  Again it was Jachney/Powers rounding first.  They had at least a 20-second lead over Josh Pfosi and Emmet Todd.  Pfosi/Todd found their groove after the first race with two very strong showings afterwards.  Rounding in third was Luke Leafgreen and John Wassink, but they were passed on the next upwind leg by Matt Marston and Cheney Brand, who would come in 3rd behind Jachney/Powers and Prosi/Todd.

If the wind was (relatively) light for Race 2, it picked up significantly for Race 3.  From the very start it was obvious that boats were overpowered.  Marston/Brand had the strongest start getting out to an early lead.  They appeared to have the lead heading downwind, but Mark Lindsay and Damian Gray managed to get some inside overlap, and rounded ahead of them at the leewards.  Pfosi/Todd would round in third, and Jachney/Powers in fourth.  But Jachney/Powers again were able to keep their boat the flattest and managed to pass the three boats ahead of them for their third bullet on the day.

The wind continued to build during Race 3.  As boats were finishing, we began to experience gusts in the 30-35 knot range.  We decided to postpone for a few minutes as these conditions were too much for running races safely.  When a 38-knot gust hit us, we decided to head back closer to Charlestown.  For 10-15 minutes we toyed with the idea of running races in the Mystic River Basin.  But due to the wind direction, there was not an area that gave us a big enough race course.  Also the winds were just as severe in close as they were farther out.  With extremely high winds and tight compact spaces, we decided to cancel racing for the rest of the day.

The fleet sailed back in, with most everyone looking relieved.  Luckily we still managed to get in three good races, and more importantly there were no injuries or major damages to sailors and boats.  Congrats to everyone for making it through such a challenging day.  Conditions like this really force you to be on your strongest game, and everyone handled it very well.  Hopefully next week we'll be able to focus more on having fun and sailing fast, instead of just holding on for dear life.

Next week is our last week of the season.  It's hard to believe another year of winter sailing has come and gone so quickly.  We will have an awards ceremony at Pier 6 after racing.  We have prizes to give away for Series 3, as well as our overall season winners.  Even if you're not sailing this week, or haven't sailed in many weeks, we'd still love you to join us.  We'll have free snacks and drink specials and one last chance to mingle with your fellow frostbiters before everyone starts their (kinda) warm weather sailing plans.

Congrats again to everyone especially to our top 5 finishers who are...

Let's all hope that this next possible snowstorm is not terrible, and we look forward to seeing you all next week for our last day!