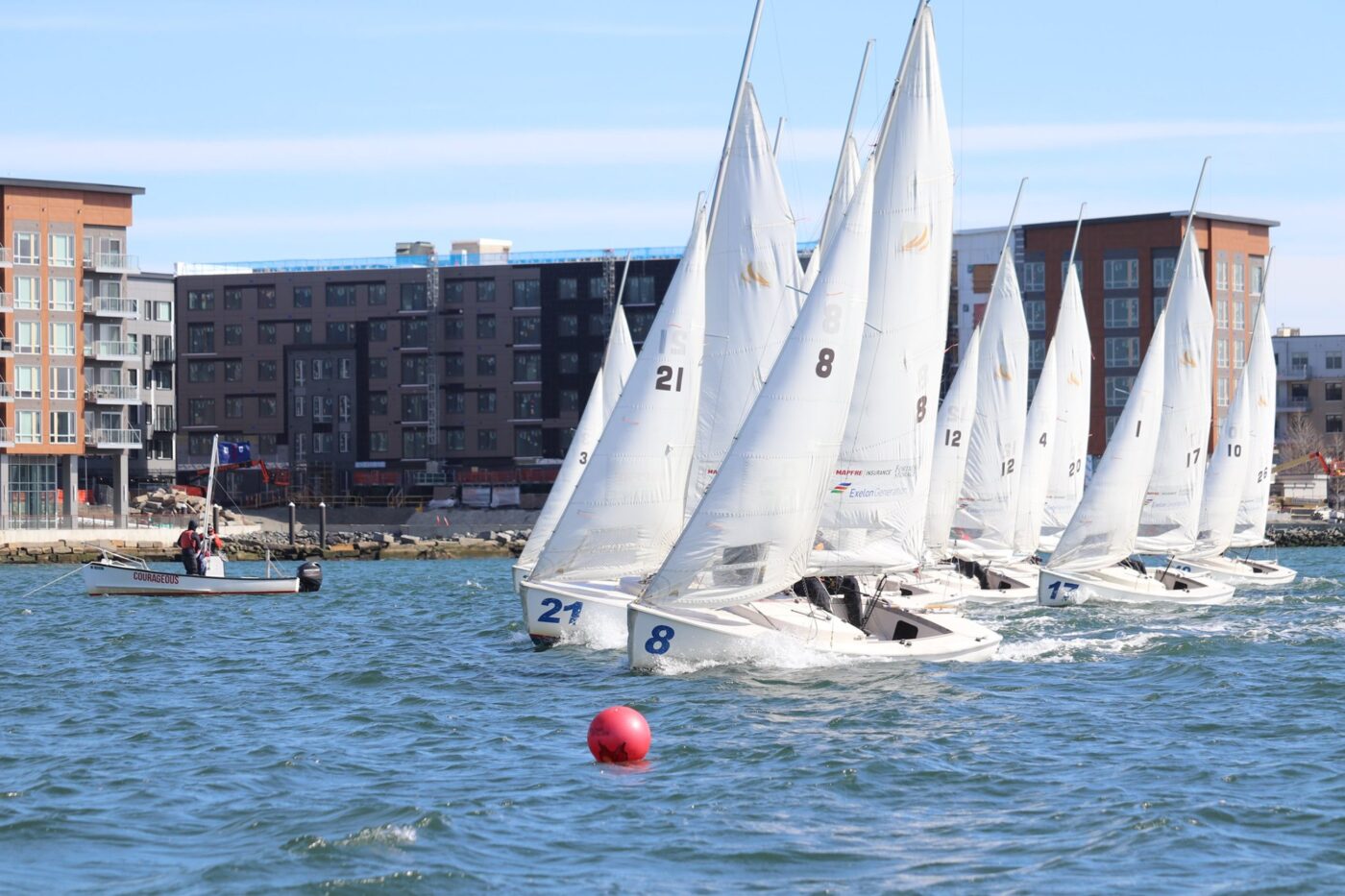 We had another exemplary day this past Saturday for our second week of Frostbiting.  Fifteen boats joined us on the line for what turned out to be six very exciting races.  Heading into the weekend the forecast was giving us a few reasons for concern, chiefly that we were expecting winds up to thirty knots out of the northeast.  That kind of weather puts us on the verge of not being able to sail, and we had talked about postponing until the breeze had a chance to come down.  Luckily our fears were abated early in the morning when we saw that the gusts were topping out at twenty knots, which were much more palatable.  There would be no postponement, and the day would continue as usual.

As the frostbiters arrived to set up their boats, winds were out of the North at ten knots.  The high temperature for the day did not get above thirty-five degrees, but there was nary a cloud to be seen the entire day.  As such, it wasn't terribly hard to stay warm.  High tide was at 1:37pm that day, and a slight current could be found running through the course from top to bottom.  After a brief skippers meeting the racers headed out to the course.  Not very often do we get a North wind, so our course was slightly different than usual.  The starting line was set up in the middle of the channel between Rowes Wharf and the fuel dock in East Boston.  Windward marks were set in line with Pier 8 in the Navy Yard.  Due to the wind direction we were able to set a longer course than usual.  If it was a day like Week 1, a long course would not have worked.  Luckily for us the wind was very steady all day and all the boats were able to get around the course in an acceptable time.

The line didn't appear to be overly favored to one side or another, and the current was enough to keep boats from being OCS at the start.  Race 1 started cleanly with Bryan Lee/AnneMarije Veenland-Lee, John Pratt/Bob Coyle, and Niko Kotsatos/Damian Grey all getting out to great starts.  While the wind was steady all day, there were still plenty of shifts and gusts to keep the fleet on their toes.  The left edge of the breeze was from Pier 4 Charlestown, and the right edge was somewhere around Pier 1 East Boston.  Kotsatos/Grey were the first to round the leewards and they would not be caught and ended up in first place.  Jen Bodde/Dylan Callahan rounded in 4th and took the right gate.  They would jump a few spots and finish in second, with Lee/Veenland-Lee in third.

Race 2 was another clean start again with Pratt/Coyle closest to the line along with Bodde/Callahan and Jim Kann/Wally A.  As the boats made their way up to the windward marks we received a radio call from a tug and barge who was headed inbound.  Initially it was hard to tell which tug and barge, since there were no less than three of them within a one mile radius of us.  Once we determined which boat it was, we also realized that our fleet would be far away as he passed by.  The only problem would have been if our boats were at the windward marks as the barge was trying to sneak through, since there wasn't a great deal of room between the marks and the East Boston shore line.  More on that later.  At the leewards it was neck and neck between Kann/Wally A and Kotsatos/Grey.  They would split at the gate, with the latter opting to go right.  Cole Constantineau/Marcelo Pereira rounded in fifth place, took the left gate and passed everyone else on the course to take the bullet.  Michael McAllister/Taylor Barstow rounded in sixth place but also passed a few boats to finish in second, with Kotsatos/Grey coming in third.

Race 3 started cleanly with boats spread evenly across the line.  The two best starts I could see belonged to Bodde/Callahan and Matt Marston/Cheney Brand.  Russel Robinson/Dave Lucia started a few seconds late, but they hit the hole at the boat end with a ton of speed and lots of clear air.  Bodde/Callahan rounded the leewards first and went left, followed by Marston/Brand.  Robinson/Lucia rounded in third and opted for the right side.  Marty Gallagher/Sandy Hayes rounded 4th, but managed to pick up a place on the next time around, and finish in third, with Marston/Brand in second, and Bodde/Callahan taking the bullet.

The wind velocity picked up a bit for the start of Race 4, but it was still a clean start for everyone.  Robinson/Lucia had an excellent start at the pin end, while Kotsatos/Grey started strong in the middle, and Marston/Brand had a good start at the boat end.  Coming downwind the first time, it was dead even between Kotsatos/Grey and McAllister/Barstow.  Both teams split at the gate, with the former going left and the latter going right.  For a good portion of the day it seemed that the left side had better velocity, but the right side was slightly lifted.  McAllister/Barstow apparently found all the lifts, and took the bullet.  Marston/Brand would come in second, and Robinson/Lucia came in third.

Race 5 started without incident.  Robinson/Lucia did the same thing as Race 3 and had a great start at the boat end.  Gallagher/Hayes and Marston/Brand started in the middle with good speed and clean air, and quickly sailed out to an early lead.  As the fleet was reaching the windward marks, the same tug and barge from before had finished their business and was headed back out.  It looked like we would have to cancel the race, which would have been unfortunate.  However, without any provocation from the mark boats, the fleet left the barge just enough room on the right side that it was able to squeeze by without incident.  The first three boats to round the leewards were McAllister/Barstow, Marston/Brand and Gallagher/Hayes.  All three boats would take the left gate and finish in the same order as well, making this the second bullet in a row for McAllister/Barstow.

Race 6 was our final race of the day.  Because our ultimate destination (Courageous, or maybe Pier 6) was upwind of us, we opted to go with a Course 5.  During a Course 5 the RC boat will pick up its anchor after the start, and anchor up by the windward marks for an upwind finish.  Because of all this movement, unfortunately I do not have any notes for Race 6.  However, I didn't need a notebook to see that McAllister/Barstow were totally dialed in and finished in first for their third bullet in a row.

McAllister/Barstow rode that hot streak all the way to a first place overall on the day.  In Race 1, Marston/Brand came in sixth place, which would be their worst finish of the day.  Their next five races went 4,2,2,2,4 and they finished second on a very consistent day.  Kotsatos/Grey were just one point behind them, and finished in third.

Overall it was a great day to be on the race course, regardless of where you finished.  It's not often that we have extra long courses, or steady wind, or great weather.  The fact that we had all three on one day speaks to how truly great this day was.  Thanks so much to everyone who came out and made it the great day of racing that it was.  And of course a very big thank you to all the Courageous staff who work so hard to get everything ready for racing each week.

This week I've already heard from a few people who are looking to find a few others to create another team.  If you find yourself in the same boat, or would like to be in the same boat, please don't hesitate to reach out.  We'd love to get as many boats on the line as we can.

I'll be back on Friday for our Week 3 Preview.  In the meantime, I hope you all have a great week!

Nate and the Courageous Frostbite Staff