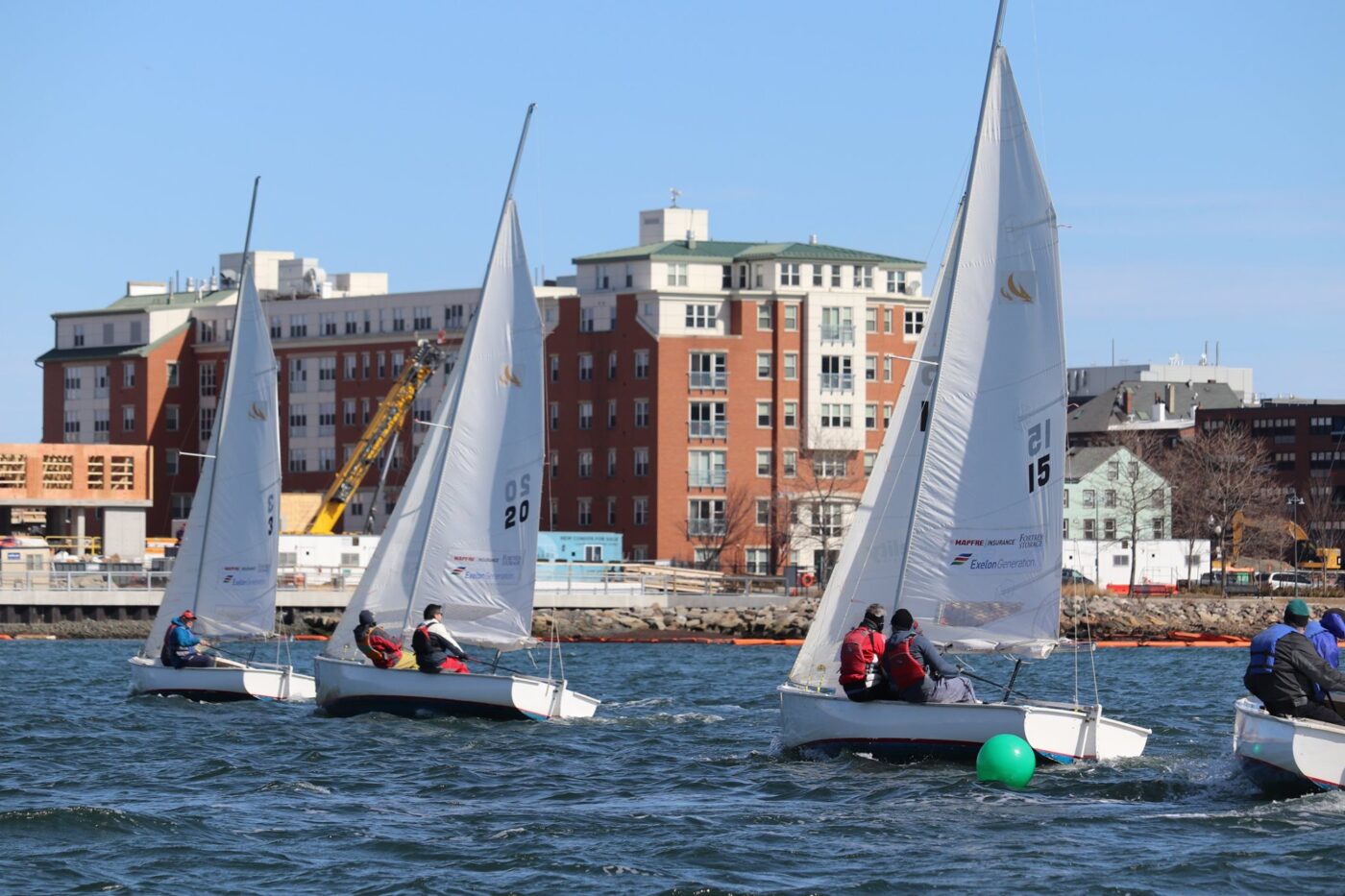 The first three weeks of our season featured some of the best weather we've had for Frostbiting in recent memory.  Week 4 this past Saturday was no exception. We were again fortunate to have sunny skies, steady breeze and some excellent racing.  On Friday night we received about an inch of snow mixed with some freezing rain and as a result, everything on the pier was covered in a thin coating of ice.  As the fleet arrived you could begin to hear the sounds of ice being scraped off of boats. This is a sound that is entirely unique to Courageous.. Once the boats were cleared off, we eschewed the skippers meeting in order to spend more time on the water.

Our starting line was set in the usual location near Piers Park and the Nantucket lightship.  Initially the wind was out of the NW and coming at us straight from Pier 4 Charlestown. But as we began to set up, it shifted more left to WNW.  The average windspeed was around 10 knots, with some gusts hitting the upper teens. Our windward marks were in line with BSC and Lewis Wharf in the North End.  During the start at the boat end it was Zach Orlov and Bryan Lee. After crossing the starting line, they sailed maybe three boat lengths before tacking and going over to the far ride side of the course, a theme that would recur often throughout the day.  Orlov/Lee were the first to round the leewards, they took the right gate, stayed on the right side, and took 1st place by almost half of a leg. Chip Terry/Dave Lucia and Dan Sullivan/Claire Guerin rounded in 4th and 5th respectively and they managed to pass a few boats to finish 2nd and 3rd.

At the start of Race 2 the wind had shifted a little to the right for the moment.  There was a good sized cluster of boats at the boat end of the line. Pratt/Coyle avoided all of this with a well executed dip start.  They started in the middle of the line just a bit closer than everyone else. Terry/Lucia were close at the boat end as was Orlov/Lee. In this race Orlov/Lee sailed about one boat length on starboard tack, before tacking over and going even further right.  But the wind came back fairly quickly and the boats on the far right side of the course had a slightly tougher leg to sail. At the leeward roundings it was Sullivan/Guerin in 1st and Greg Howard/Dorothy Liftig in 2nd. Sullivan/Guerin would not be caught this race and finished in 1st.  Chudzicki/Kotsatos rounded in 5th but finished in 2nd, with Matt Marston/Cheney Brand in 3rd.

Race 3 had a big left shift at the start.  There was a little bit of a crowd at the pin, but most boats were still 1-2 boat lengths from the line at the start of the race.  Pratt/Coyle were the only ones up on the line and they very quickly sailed out ahead of everybody else. Orlov/Lee started at the boat end, and again immediately tacked and went right.  The wind then settled down and did it's usual thing on the day, blowing pretty much straight down the course, with the occasional rightie coming through. At the leewards Pratt/Coyle had a slight lead over Orlov/Lee.  They would both go right and finish 1st and 2nd in the race. Dana Robinson/Mike Cohen rounded in 5th, but they were able to pick up two boats by going left and finished in 3rd.

Race 4 was another pin favored start with most of the fleet starting at that end.  There was one boat OCS that I could see and they cleared themselves quickly. Terry/Lucia looked to be very close to the line with going over it, and had some good speed.  At the leeward roundings most boats opted to go right. The few boats that were at the top of the fleet and went left all finished in double digits. Orlov/Lee rounded in 3rd, but were able to take 1st place by the end of the race. Terry/Lucia were close behind in 2nd, and Cole Constantineau/Manlio Lope came in 3rd.

For the start of Race 5 we dropped the pin a little, squaring the line. This created a bit of a cluster around the boat as most boats wanted to start at that end. I saw Chudzicki/Kotsatos almost get pushed over the line early, but they were able to speed up, break the overlap and find a lane. They started closest to the line with the best speed, right next to Robinson/Cohen who also had a solid start.  Orlov/Lee waited 1-2 seconds after the start for a hole to open up at the boat end. This time they went 6 or 7 boat lengths before tacking over to the right side. They would round the leewards ahead of everybody else by about 8-10 boat lengths. But behind them were four boats very tightly grouped together. Zach O'Brien/Jim Watson were able to separate themselves just enough from the group and finish in 2nd, with Terry/Lucia in 3rd.

At the start of Race 6 we started to see some clouds for the first time that day.  And when the clouds came out, it got real cold, real fast. But luckily the day was almost over so we didn't have to deal with it for too much longer.  The start was very close but Marty Gallagher/Sandy Hayes were faster than everybody. They had a great start and sailed off to an early lead. Orlov/Lee were shut out at the boat this time, and it was Marston/Brand who won the boat end and tacked off to the right quickly thereafter.  Gallagher/Hayes maintained their lead through all four legs, but Robinson/Cohen were close behind at the leewards and the finish. Sullivan/Guerin rounded in 3rd and tried to go left, a move which ultimately would not pay off. Instead it was Chudzicki/Kotsatos who jumped a few places and finished in 3rd.

Race 7 was our last race of the day.  We usually don't have enough time to run that many races in one day, but a slightly smallish course and no delays for traffic or course adjustments meant we were able to quickly get the races off.  With 20 seconds before the start, most of the fleet was sitting up on the line, but a strong current was running from top to bottom of the course. In the last 20 seconds most of the fleet drifted down and there was a big line sag.  The only boats immune from the line sag were Orlov/Lee at the pin end, and O'Brien/Watson. Race 7 was a course 5 which meant that I was not able to see what happened at the leeward rounding. But I did see two boats get tangled up at the windward marks, but everybody did their circles and there was no damage to any of the boats.  Orlov/Lee would take 1st again, with Neal Goldman/Kathryn O'Neill coming in 2nd and Gallagher/Hayes in 3rd.

The racing was back and forth all day, and just about any boat could come in 1st on one race, and come in 13th on the next one. But one boat was immune from that fluctuation and that of course was Zach Orlov and Bryan Lee. They were a model of consistency all day long and finished with almost half the score of the 2nd place boat.  It was a challenging, yet extremely fun day reminded us why we spend the time shoveling ice off of boats.

Thanks to everyone who showed up and made the day what it was.  And congrats to our top five finishers on the day...

Due to higher gusts, green flags only
Its the final hours of our Spring into Saling event, buy your lessons and memberships today! Spring Sale