For the second time this season we had winds at the very upper edge of what our boats can handle.  While most people wouldn't even consider going for a walk in that kind of weather, we had twenty-two (!!!) boats on the line for some pretty extreme winter sailing.  Temperatures that day were an improvement on the previous week, with a high right around forty.  But the big story on the day was the breeze.

The wind started that day as coming from the West with 15-20 knots of velocity.  When the breeze comes from the West and through the buildings downtown, we can get some pretty funky shifts and gusts, and that was exactly the cast this past week.  Standing on the pier at Courageous the wind was more from the Northwest.  As it came funneling down the Charles we had numerous gusts over 30 knots throughout the day.  The past few weeks featured both high winds and low temperatures, and we opted to stay close to home when setting the course.  However this week we opted to head out a little further to have a more open sailing area, and to find a little relief in the lee of the buildings downtown.  And it did appear that those buildings gave us some shade.  The wind speeds seemed to be about 5-10 knots less where we were set up, as opposed to Courageous.

This week we set our starting line close to the fuel dock in East Boston, just south of PIers Park.  We had a steady breeze that was coming from the Fort Point Channel.  However it became pretty apparent that the wind was going to be anything but cooperative.  For the first part of the day the wind would shift as far left as the ICA, and go as far right as BSC and Lewis Wharf.

Picking up where we left off last week, our first start was a general recall.  We restarted with the "I" flag up, and it would stay up the rest of the day. 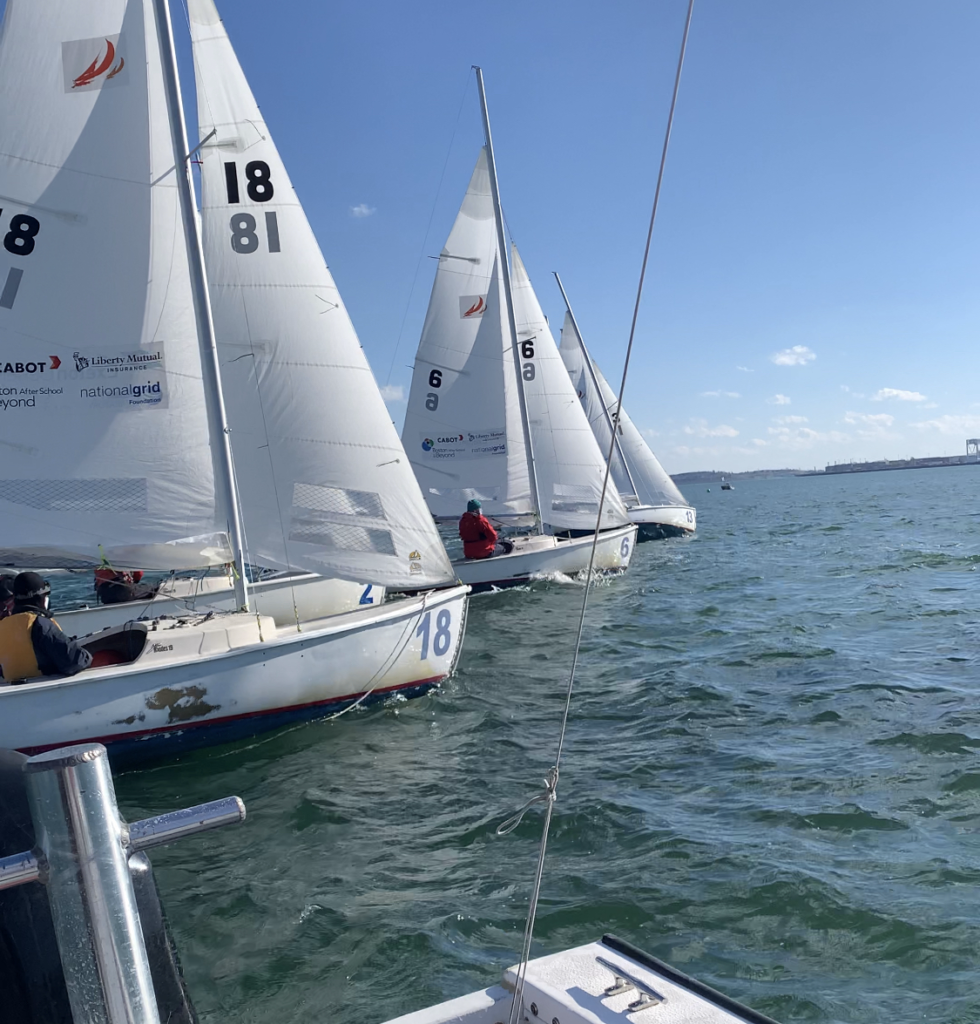 This photo was taken with about 5 second to go.  Boats #6 and #13 were both OCS at the start while boats #18 and #2 managed to stay clear.  Not pictured is boat #21 Jen Bodde/Marcelo Pereira who sped through the hole between RC and boat 18 for a great start.  The wind was pretty far right for the first half of the leg, and it looked like half the fleet was fetching the mark.  But it seemed to even out a bit by the time the fleet reached the windwards.  Coming downwind John Pratt/Bob Coyle rounded in 1st and maintained their lead ahead of Reade Everett/Dana Robinson and Niko Kotsatos/Carolyn Marsh.  On the second time up the course we had a couple really big puffs that looked to be right around 30 knots.  However the fleet looked to be in control, although probably more than a few people got a little wet.  Pratt/Coyle finished the race in 1st ahead of Everett/Robinson and Kotsatos/Marsh.

Race 2 had another general recall at the start.  As the day continued the wind was gradually moving further to the right, which created more demand for a boat end start.  We continually moved the pin up higher, but it seemed like every time we did that, the wind would go even further right.  And as soon as we'd go to move it again, the wind would go hard left.  As such it forced both the racers and RC to be moving around constantly.  Race 2 had a clean restart with Pratt/Coyle and Bodde/Pereira again out to early leads.  But it was Everett/Robinson who rounded the leewards in first and finished in first ahead of Kotsatos/Marsh and Legler/Smith. 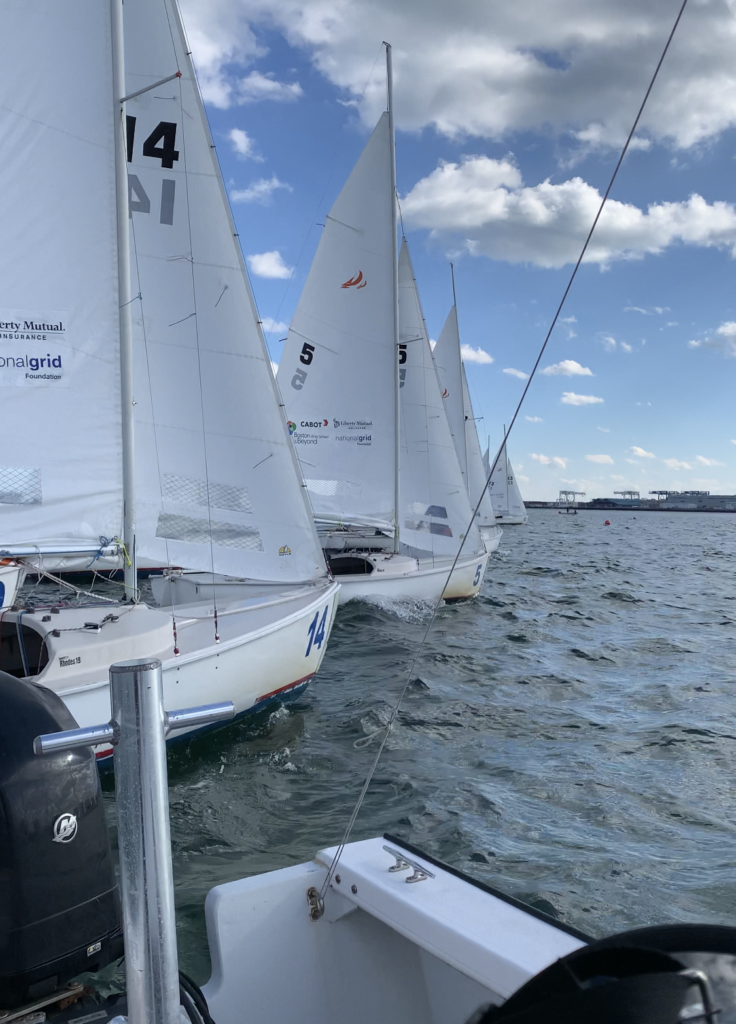 Race 3 had our first clean start of the day.  You can see #5 (Pratt/Coyle) and #14 (Veenland-Lee) closest to the line.  The wind was way down here, probably the lowest wind we'd had all day.  As the boats were making their way up the course, we noticed an inbound tug and barge near Castle Island.  Because our course was taking up most of the channel, we decided to shorten a race for the first time this season.

When we decide to shorten a race the RC will sound two whistles and one of the boats (usually the mark boat at the leeward gates) will display code flag "S".  which is a white field with a blue square in the middle.  When the course is shortened it means that the finish line is between the two leeward gates.  The nice thing about this is that it means you just sail the course as you normally would.  But once you have crossed the line between those two marks, your race is over.  There is no need to round the marks, or to continue to the finish line.  Veenland/Lee probably would have won the race if we had to do another lap, but just the same they were happy to take 1st place in the shortened race.  Marston/Brand came in 2nd and Everett/Robinson came in 3rd.

Race 4 would be our last race of the day.  At our first attempt at starting the wind was now the further right than it had been all day.  This lead to a huge pile up at the boat, and most of the fleet was OCS.  Before the restart we shifted the course about 40 degrees to the right, with windward marks somewhere between Rowes Wharf and Long Wharf.  We also attempted to bring the pin even further up, but 30 knot winds and a strong current kept pushing that mark down more than we wanted to.  The restart had another big pile up at the boat end, and 4 boats were OCS.  However the rest of the fleet was able to start cleanly.  If we were going to run more races, or the wind had been a little more manageable, I think we would have taken more time to make sure the course was more square for that start.  However the wind velocity seemed to be increasing and we decided to go ahead with it, so that we could get boats off the water as soon as possible.  The race would end with Legler/Smith in 1st, Kotsatos/Marsh in 2nd and Everett/Robinson in 3rd.  Everett/Robinson finished with a total of only 9 points on the day, enough for a solid first place victory.  Congrats to them and to our top 5 finishers...

A big thanks to everyone who came out and braved a pretty crazy day on the water.  Remember, most people didn't even leave their house that day...

Also I have some more data I'm excited to share with you.  First, I believe Luke sent out the link with all the RaceQs data, but here it is again if you want to take a look.

And 2nd, Niko was again kind enough to share some of his thoughts on the day, I'll include them here...

We think the key thing upwind was keeping the boat moving forward, and not sideways. Even when we were on the wrong tack in terms of the lift, we could make significant gains on the fleet by maintaining momentum. In the flat water, that means a few key things:

Keeping the boat flat: In the puffy, flat-water conditions, we really want to keep the boat with 0-10 degrees of heel (smaller range if possible) ALL the time. Every time you heel past ~10 degrees, the boat goes sideways at an alarming rate. We do this with a series of adjustments as the puff hits and then dissipates:

One "drawback" to sailing pinched, is the big headers almost force you to tack "too much". You have to decide almost in advance if you're going to tack with a header (is there another boat in your way, and where is the mark?) or bear away in it, because once a big one comes, you don't have time to assess. Just as important as alerting your crew to a tack, is to say "staying" to let them know you're NOT tacking in a big header.

No idea about the downwind, as we lost a lot of distance/boats on those legs.

Thanks again everybody for a great week of racing.  It was another week full of challenges to overcome, but there's not much more we haven't dealt with already this season.  Next week looks to be a little lighter, but we'll deal with that problem when it arrives.  In the meantime I hope you all have a great week.