Another great week in the books!  This time we had some bone-chilling temperatures, but that didn't stop nineteen hardy teams from showing up and battling it out over four (very tough) races.  Lucky for us this week the wind speed was a bit less extreme.  If it had been the same wind as Week 8 but with colder temperatures, we would have all been spending yet another day on the couch.  But lucky for us the wind was a very manageable 10 knots out of the NW, with gusts that never got above 20.

The air temp was a balmy 9 degrees (Fahrenheit) when we first arrived on the pier, but it would eventually get up to about 20F by 2pm.  We set our race course in a similar spot to last week, with windward marks right off Pier 4 Charlestown, and a starting line just north of Pier 1 East Boston.  With the wind being a little lighter, we opted for a slightly shorter course than last week, but the difference was not significant.

The winds were very shifty all day long with the left edge coming from the USCG base, and the right edge going as far as the Spaulding Rehab building.  We had an outgoing tide all day long, but it didn't appear as if they were draining the Charles River, and so current was less of a factor than it has been in the past.  However the constantly shifting breeze made for some very challenging windward mark roundings.

With more reasonable breeze and decreased current, the starts were very competitive this week most of the fleet up on the line at go time.  Race 1 had a big left shift at the start which pushed a lot of boats away from the line.  Cheney/Brand (#9) were OCS with 20 seconds to start, but they were able to duck the line in time ("I" flag was not up yet).  Ansgar Jordan/Emmet Smith (#12) and Kotsatos/Syed (#1) were the closest to the line and were already on, or in the process of getting to port tack.  Kotsatos/Syed had a sizable lead at the leewards and wouldn't be caught.  Jordan/Smith came in 2nd with Robinson/Pereira in 3rd.

Here we had a very aggressive start the first time around.  Most of the fleet was right up on the line, the only problem was there were still 30 seconds to go in the sequence. There were just too many boats OCS and being completely unable to see the pin, we had a general recall.  After a general recall you can typically expect the "I" flag to be up.  The "I" flag is a yellow field with a black circle, and when that flag is up it means the One Minute Rule is in effect.  That means that anyboat who crosses the line early with less than a minute to go, must round an end of the line (RC boat or pin) in order to clear themselves. 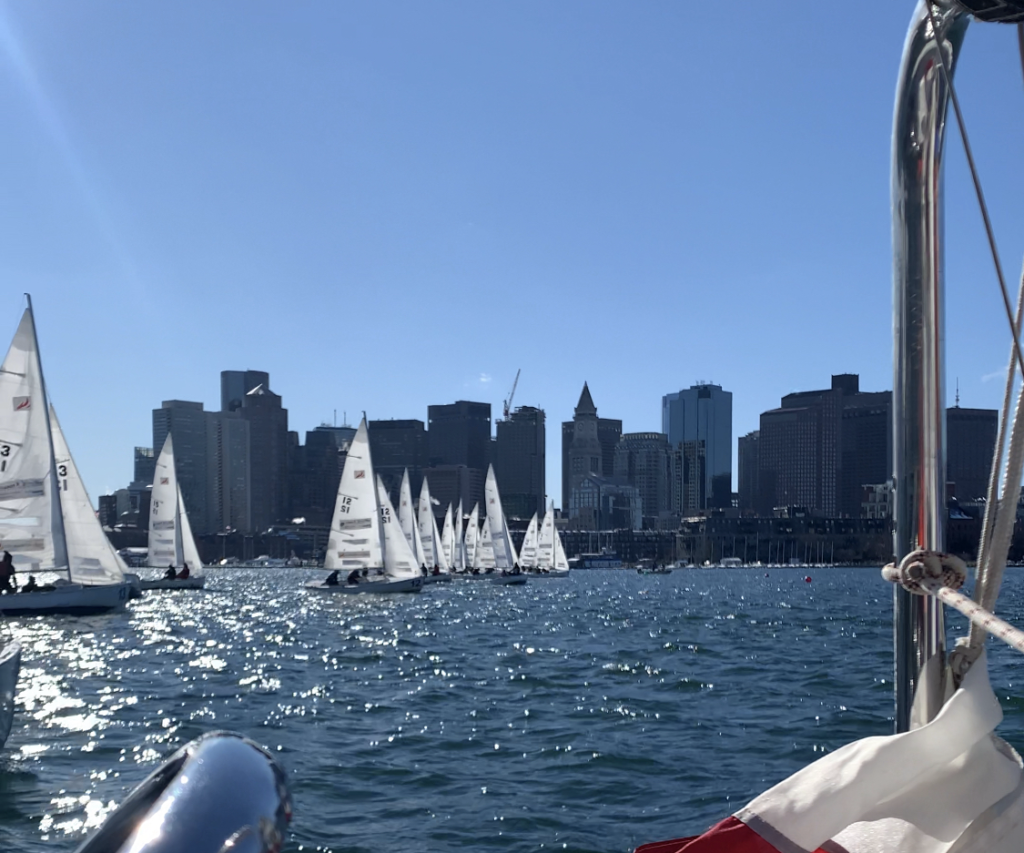 The restart for Race 2 was all clear.  The wind was in a bit of a left phase at the start, and that meant that most of the boats were battling at the pin end.  That left a hole at the boat end that both Pratt/Coyle and James Pinder/Ian Taylor were able to hit with a lot of speed.  At the leeward rounding it was a split between Marston/Brand and Jordan/Smith with the latter edging it out at the finish for the bullet.

We started Race 3 with the "I" flag already up.  But that didn't stop the fleet from being aggressive.  Unfortunately most of the fleet was over the line with 20 seconds still to go and we had another general recall.  Luckily the restart was clean.  Again we had most of the fleet down at the pin end, and Pratt/Coyle again had another great start at the boat end.  Pinder/Taylor had another great start as well and would finish in 2nd this time, just behind Jordan/Smith who grabbed their second bullet of the day, and only their 4th point as well.

Our first attempt at starting Race 4 was going to be another Course 4, the same course we'd been running all day.  And even though the I flag was up we had another aggressive start leading to another general recall.  On the restart we decided that it would be our last race of the day, and we opted to run a Course 5 instead.  The reason to head in a little early was twofold.  1) It was cold.  2) We had an outbound tanker that was less than 30 minutes away.  Luckily the restart was clean with almost the entire fleet up on the line, and nobody OCS.  Kotsatos/Syed would finish with their 2nd bullet of the day, but it would not be enough to take down Jordan/Smith who on the day had a 2,1,1,2.  Great job by them and to the rest of our top 5 finishers on the day.

Check out the Racing on RaceQ's!!!

I was really happy to see that we had a lot more boats using the RaceQ's app while they were on the water.  From talking to them, it sounds like it was pretty simple to set up and in the end provided some pretty cool data.  It looks like we had 5 teams last week use it, and it would be great to get a few more next week.  If you have any questions about it setting it up, please let us know!  When you look at the RaceQs data, keep in mind that the boat labeled ED, is in fact not some person named Ed, but the team "Easily Distracted".  I spent an embarrassingly long time trying to figure out which team this Ed person was on before I realized the truth...

But a sincere thank you to all of you who braved the elements and came out.  It really was a great day to be on the water and I think at the end of the day we all agreed that the conditions were slightly preferable to the week prior. But we know that (pretty much) no matter what the conditions are, our intrepid fleet does not shy away easily.

Thanks again and I look forward to seeing you in a few days!