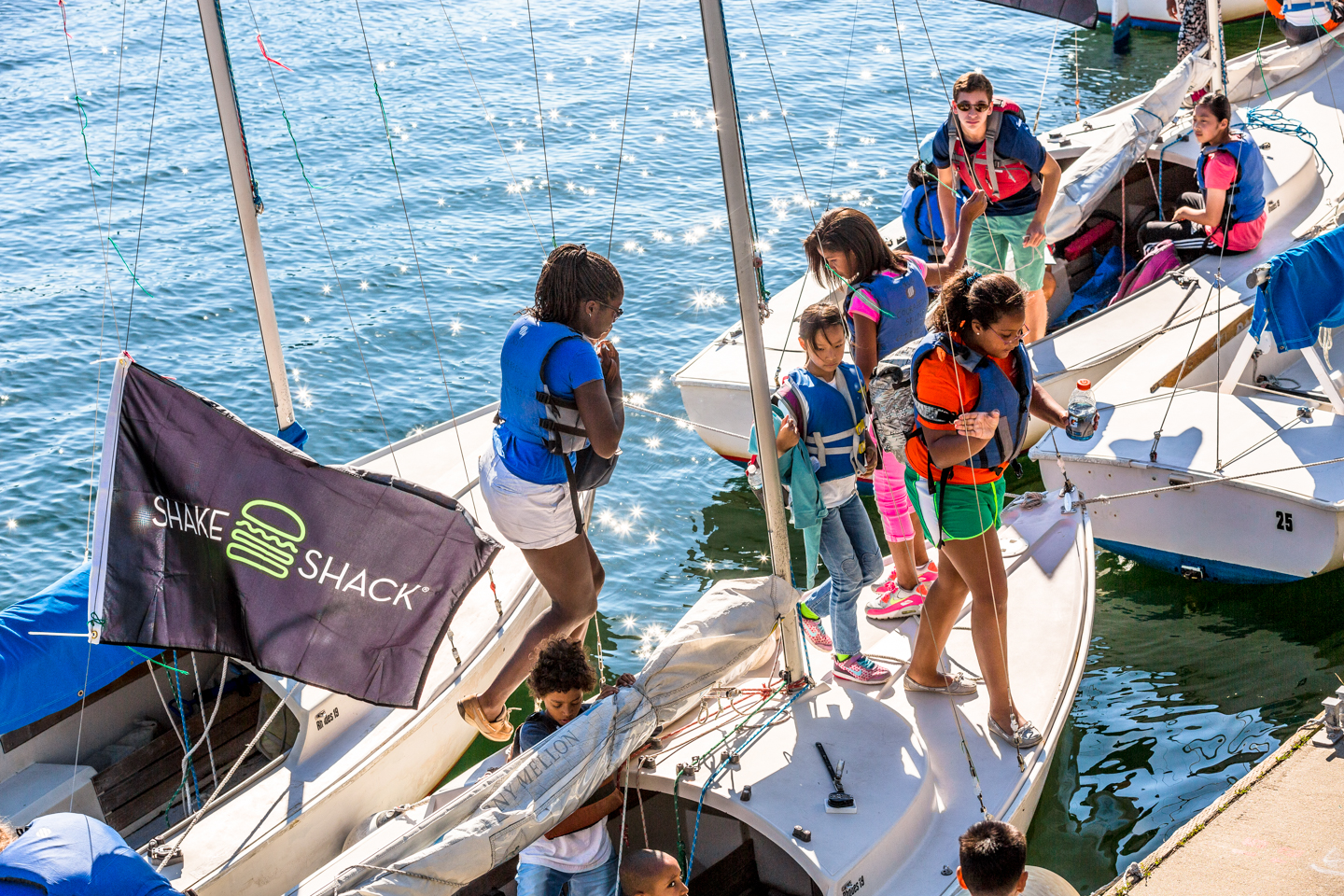 One of the best memories of the summer was the 8th of August.

A large majority of the IIT’s, Instructors in Training, were asked to help out with the Swim Sail Science field trip to Fan Pier. Everyone was excited about Shake Shack sponsoring us. The kids were especially excited about the free lunch. On our way to the pier, we had a fleet race to Green 13. Kayla and Caroline came up with the idea that is a water balloon hit your boat you would have to do a 360. Even though I knew that the purpose of the penalty was to keep the fleet together, the kids got super competitive and started to use their sailing skills to try and beat the other boats. With our decorative Shake Shack flag billowing on our backstay, we placed a nice fourth.

After docking in front of a favorite museum of mine, the ICA, we tied up our boats and made our way up to the pier. However, we had a nice surprise waiting for us. As I look up from the four smiling faces of kids who are excited to eat Shake Shack, I see the longest line of employees ready for our high fives. Every single employee had a smile on their face and to be honest, it was the warmest welcome I had ever received. After experiencing the longest line of high fives, we went up to the nice seating area with a small playing field next to it. It was the perfect set-up because once kids ate their lunch (with a choice between a hot dog and a hamburger in addition to fries and lemonade) they could let out their energy on the playing field. At one point there was soccer, monkey-in-the-middle, gymnastics, AND a dance-off all going on at once. The Shake Shack employees made an effort to bond with the kids as well as the instructors. So when people were playing soccer, monkey-in-the-middle, gymnastics, and especially the dance-off, the employees were right there with us. They taught us the secret Shake Shack chant and clap as well. Ending all the fun and games was a tough task to do but in the end we had to say goodbye to the free food and great people.

After coming back to Courageous and de-rigging our boats, seeing the Shake Shack flags on our boats left me with a smile. We also brought some leftovers back to Courageous which left me with an even bigger smile as well as a full stomach. To end this blog post, I would just like to thank Shake Shack for choosing Courageous as a place to sponsor. I believe that the kids all had the time of their lives and that they will remember this day for years to come. I support the idea of making this field trip an annual event and I have also found a newfound respect for the employees of Shake Shack.

Once again, thank you 🙂