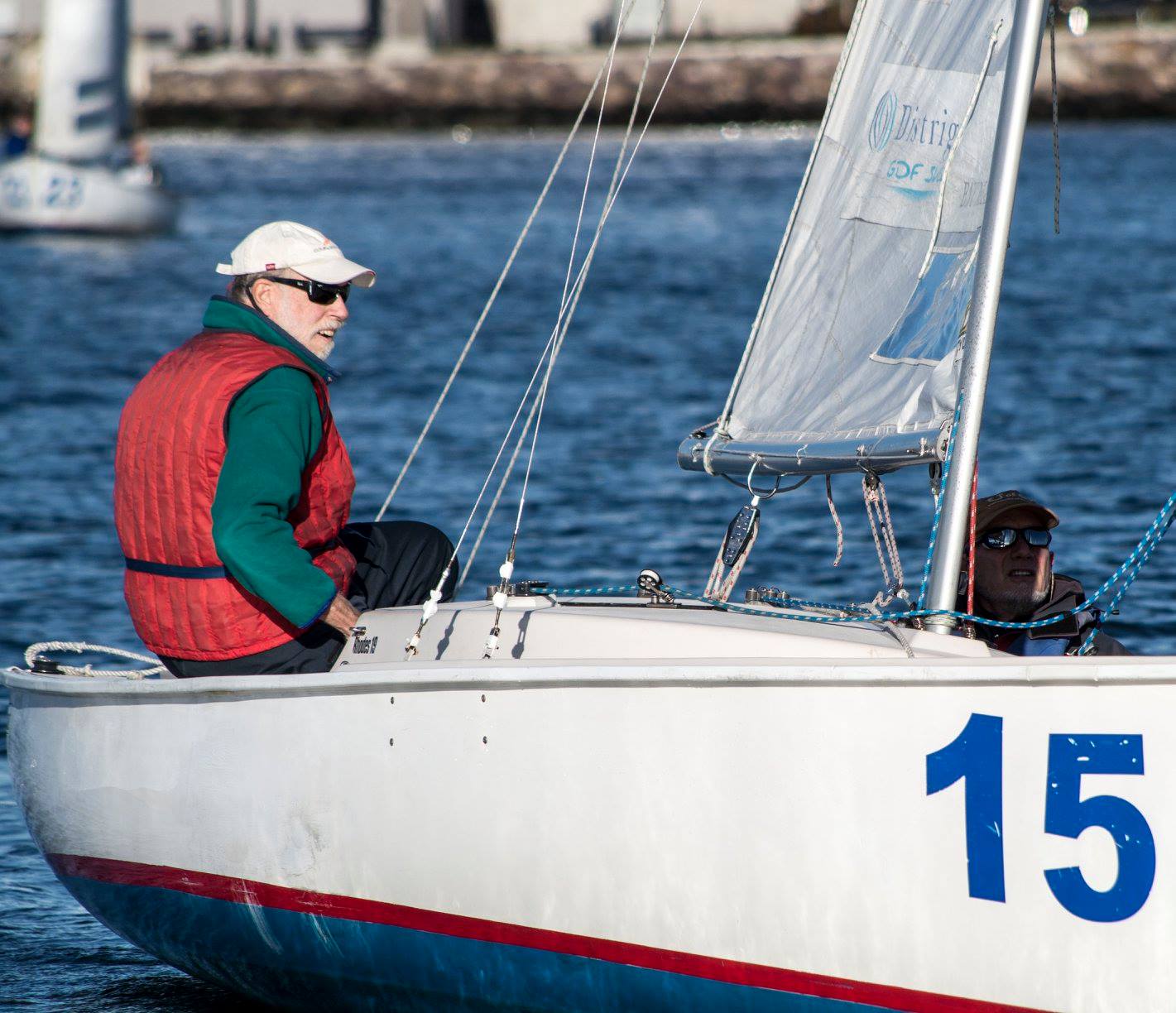 Joe Duplin, Star world champion and my sailing mentor of 45 years ago had one basic piece of tactical advice, “point your bow at the mark!”

It was very shifty on Saturday and sailing on the lifted tack upwind and the headed jibe downwind was critical. With oscillations of as much as 20 degrees, you needed to know if you were lifted or headed by referencing the boat’s direction to the orientation of the harbor. It was also critical to set yourself up in a lane to maintain clear air both up wind and downwind.

Good starts are essential to good finishes. We liked starting middle right so that we could tack when we wanted to. We got a line sight from the committee boat across the pin end to the Boston shore so that we could be up to the line but not over, and we used it every time. We tried hard to be going as fast or
faster than the boats around us from 20 seconds before the start and to never fall behind the boats above us.

Our setup before the start in full hiking breeze is to pull the main halyard quite hard to keep the draft at least up to the middle of the sail, pull the jib halyard to take all the wrinkles out, and pull the backstay fairly snug to put a little bend in the mast and feather the top of the main. The jib leads were mid track and the traveler was centered all day. We sheeted the jib and main quite hard and steered the boat to maintain a reasonably low angle of heel between 10 and 15 degrees. Trimmed like that, the boat was very balanced, easy to control and accelerated quickly. We sailed the telltales hard when we were slow, and light when we were fast. We responded quickly to lifts, and slowly to headers to maximize our gains to weather. We were typically higher and faster than the other boats around us upwind.

There was more consistent wind in the middle of the harbor and more port tack than starboard, making it important to go on port tack whenever it was lifted. There was outgoing current and we always erred on the side of overstanding the weather mark by at least 5 degrees. Whenever we reached in over boats pinching below us, we always gained, especially over people who went on port, fouled and did circles.

Downwind we always looked back for clear lanes and to see which side was going to bring the new wind. This was especially important for choosing which leeward mark to round to get to the new wind first. At the finish the pin was frequently favored by a starboard jibe header. We went from third to first in one race by simply reaching directly to the pin while the lead boats jibed down towards the committee boat.

Setting the boat up so everything is under control and it’s easy to sail, wearing warm, dry and comfortable clothing, and then most importantly of all, having an awesome crew like Jim Watson, makes sailing even more fun. As Joe Duplin said, “Babe, you gotta just go out there and love it!”