Because Week 5 was cancelled due to a lack of breeze, and coupled with our usual holiday break, it had been four weeks since we've been able to go racing.  But luckily for us we had terrific (and frustrating) conditions on the course all day long.  To start we had sunshine, which is always a welcome thing.  High temperature for the day was 35F, so I was thankful we had the sun, although it found more cloud cover as the day went on.

Our starting line was set close to the entrance to Rowe's wharf, close to the Boston side of the channel.  The windward marks were placed right in the middle of the shifts we were seeing.  The left edge of the breeze seemed to come from Courageous and Pier 4 (NNW) and the right edge at times could be coming directly from the Eddy building in East Boston (NNE).  Low tide on the day was at 1:43 pm, making for an outgoing tide the whole time.  Also I'm pretty sure they were pumping the Charles river, adding to the drift which ran from top to bottom of the course.

Overall the wind was on the lighter side, and there were lots of holes that popped up all over the course.  All day long it was important to stay in the breeze and try and stay in the middle, except when seeking current relief.  Boats that were not careful could easily get trapped in a big hole and coupled with the current, it wasn't long before they were moving backwards!

With 22 boats on the line this week, we opted for a nice long start line.  Our leeward gate was placed closer to the start line than usual, which initially created some confusion as to which mark was the pin (this year we are using a Green Ball for our pin FYI).  But I think it helped the fleet be aware of where the line was at all times.  Also the strong current created a fair bit of line sag all day long.

Race 1 had a pretty sizable line sag, Dana Robinson/Marcelo Pereira were about a boat closer to the pin than everyone else.  Saul Rosen/Shyah Miller were not far behind, and had a great start, along with John Pratt/Bob Coyle, the latter rounding the leeward marks in first place.  They rounded just ahead of Ken Legler/Emmet Smith.  Pratt/Coyle took the left gate, but Legler/Smith opted for the right gate and would finish in first.

Windward mark roundings were challenging, what with the light breeze and strong current.  We noticed a few slo-motion bumper boat situations happening.  We were thankful there was no damage, but just a quick reminder that we should be trying to avoid contact whenever possible. 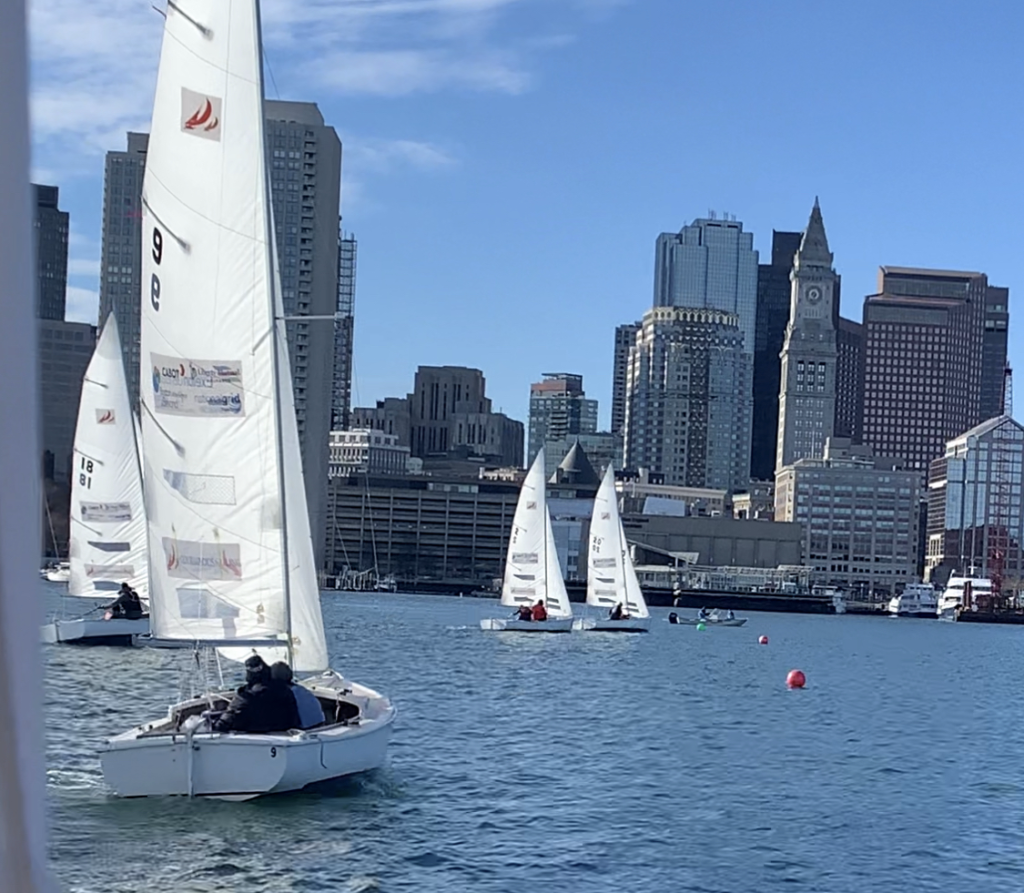 The start of race 2 saw a lot of boats piled up at the boat end.  Legler/Smith are in the foreground seen with about 3 seconds to go, with boat 2 (Jim Kann/Wally Aponowich and boat 20 (Carolyn Marsh/Niko Kotsatos) had a great start all alone at the boat end.  They were the first 2 boats to round the leeward marks, with Chris Lombardo/Tom Doak a not-too-distant third place.  However both Kann and Marsh took the left gate, while Lombardo opted to go right.  On the second time around the course, the wind died way down.  Some of the boats on the left side lost a lot of speed, and Lombardo/Doak were able to take advantage and finish with their first bullet of the season.  Nice job!

The wind came back up for the start of race 3, with our strongest winds of the day so far.  With the wind in a left phase, we had a group of six boats try and all start at the pin end.  My apologies as the photo is a little blurry... 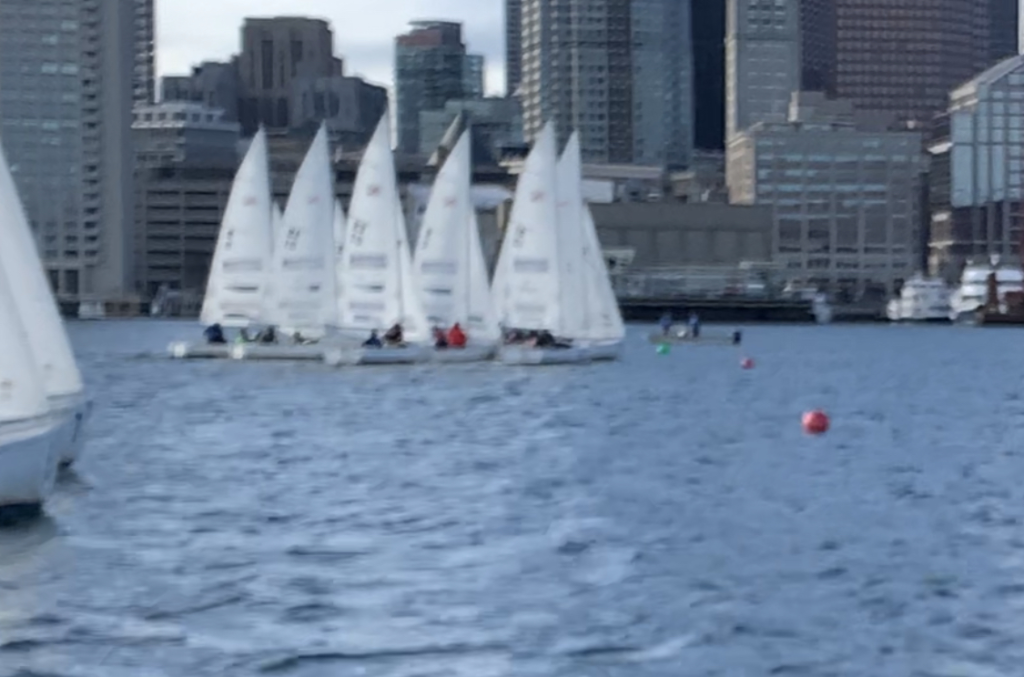 Legler/Smith ended up being OCS by about 2 feet and had to clear.  All that activity seemed to slow down the boats at the pin end.  In the middle of the line we had Chip Terry/Dave Lucia and Robinson/Pereira jump out over the rest of the fleet.  At the leeward rounding, Terry/Lucia were 8 lengths ahead of everyone else.  The closest boat to them was Kann/Aponowich who would finish behind them in second place.

By the time race 4 started, we were seeing more clouds and the sun started to disappear a bit.  Luckily at that point we were over halfway through the day.  The wind was also back down for the start and we had most of the fleet pretty far away from the line. 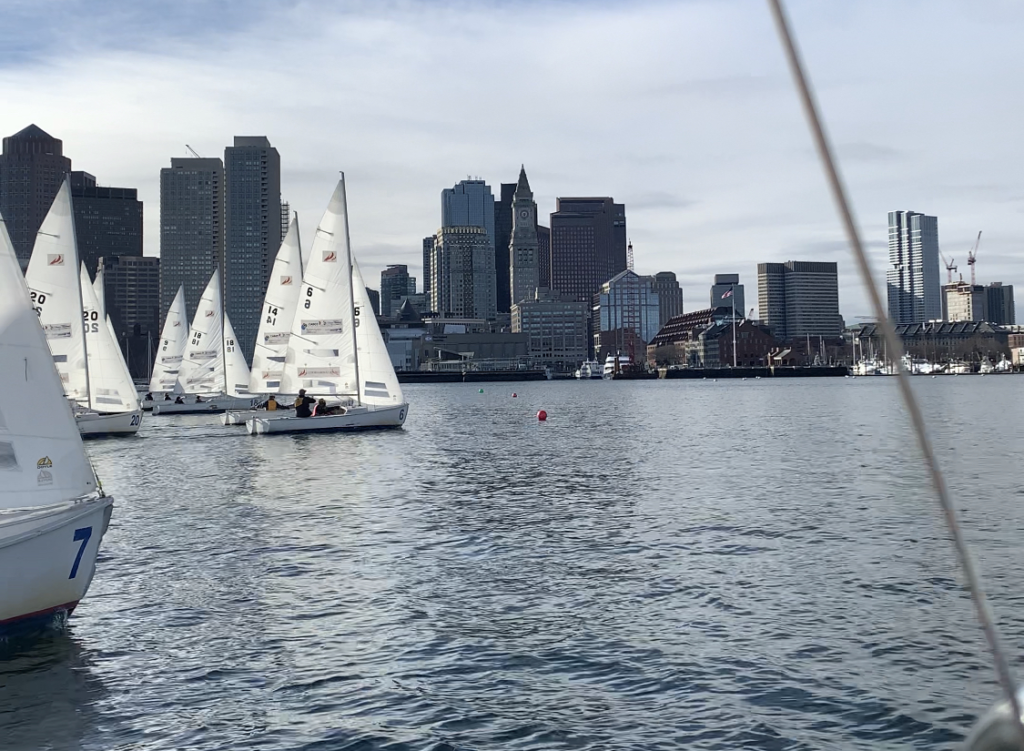 You can see Marston/Brand in #6 along with David Chudzicki/Robin Weatherill in #14). Terry/Lucia were also right up on the line at the boat end in #7.  Boats were mostly spread out on the line, but still a bit of a pile up at the boat.  Again the fleet was pretty evenly spread out headed up the course.  I think the general consensus on the day was "just because it worked last race, doesn't mean it's gonna work again this race."  Robinson/Pereira would finish the race in first place, ahead of Chudzicki/Weatherill who finished in second for their best finish on the day. 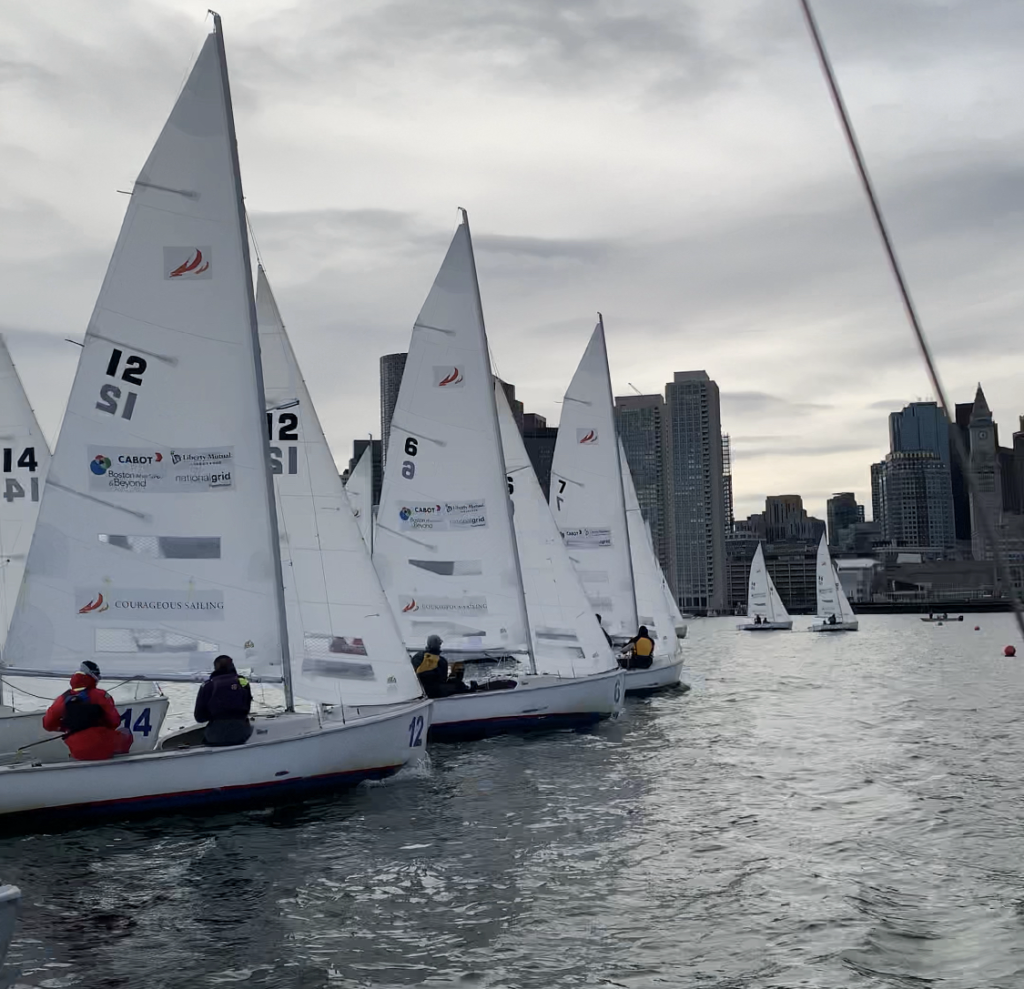 Marsh/Kotsatos are closest at the boat end at the start, and you can see Terry (#7) Marson (#5) and Eleni Asimacopoulos/Matt Hebert (#12). First place in this race would go to Pratt/Coyle, with Marsh/Kotsatos coming in second.

Between races 5 and 6 we had our first delay due to traffic this season.  When we first sailed out to the course, there was a tug and barge anchored in designated anchorage #1, which is usually right in the middle of the channel, a little further south than we usually set up, usually in the vicinity of the Hyatt.  Well wouldn't you know that tug and barge decided to wait to start moving until we were almost completely done with the day.  We decided it was worth the delay, so we held for about 15 minutes while they picked up the anchor.  We directed the fleet to stay on the Boston side, leaving the East Boston side clear for the traffic.  Luckily we were able to start without too much delay.

The last race of the day would go to Terry/Lucia, who were the only boat on the day two get two bullets.  Great job guys and congrats to all of our top 5 finishers on the day...

Also this week Ken Legler was kind enough to again share with us a few of his observations on the day...

A quick move for the lead, then outsmarted

Coming downwind in the last race, Emmet and I made a move that put us in the driver’s seat for first, or so we thought.  Niko/Carolyn were on the right side of the run in first with Chip/Dave in close second.  Emmet and I were not far behind also on the right heading for the right gate mark by winging on starboard.  I heard bow waves from behind and to port.  “Gybe” I called, and we went right into it.  It wasn’t until we were gybing that I had a moment to look to see the boats coming down on a veer in more pressure and to see what our exit angle should be with the corresponding balance and trim for that angle.  It worked.  By the time Niko and Chip gybed we caught their wind and sailed past right toward the nearby right gate mark.  I thought they had both followed.

We made a good gybe onto starboard, turn, and big trim (by starting the trim early) unlike some of our other gybe roundings.  We started off to the left of the last beat in nice breeze.  Emmet informed me when the boat behind tacked.  “I’m not tacking in the middle of the supermarket” I responded, as the bulk of the fleet was still coming down the middle of the run in a tight pack.  We went further, got a header in more good breeze and tacked behind the pack in a clear lane.  Next thing I know Chip/Dave are crossing us easily.  They went on to win the race and the day by that margin.

Chip explained his reasoning later.  He knew the right gate would require a huge turn which takes a bit to recover from.  He reasoned that they would be better off sailing all the way over top to the far gate mark but at full beam-reaching speed, rather than rounding the near mark in a close third.  Due to the veer, that far gate mark had become favored.  Chip/Dave rounded to port, then soon after tacked onto the big starboard lift, also clearing most of the fleet heading downwind.  It seems the left shift we got, ten lengths after rounding, was just the mean wind direction.  It was the rounding that made the difference.  In addition to rounding the favored mark, Chip/Dave made less of a turn, preserving more speed and with one tack was able to cross for the lead.

The boat that rounded behind us and tacked, making a 270-degree turn?  That was Niko/Carolyn.  It cost them a few boats.

Thank you Ken and thank you to everyone who came out and participated.  It was so great to have 22 boats on the line, I hope to do it again this coming week. Please remember to check in for racing by Friday at the latest.  You can do it earlier if you want!  If we know who is and isn't going to be here, we can work to make sure we have a full fleet every time.

Thanks everyone.  We'll be back on Friday for our look at Week 7's conditions, and also we'll announce our prize winners for series 1.  Hope you're all having a great week!